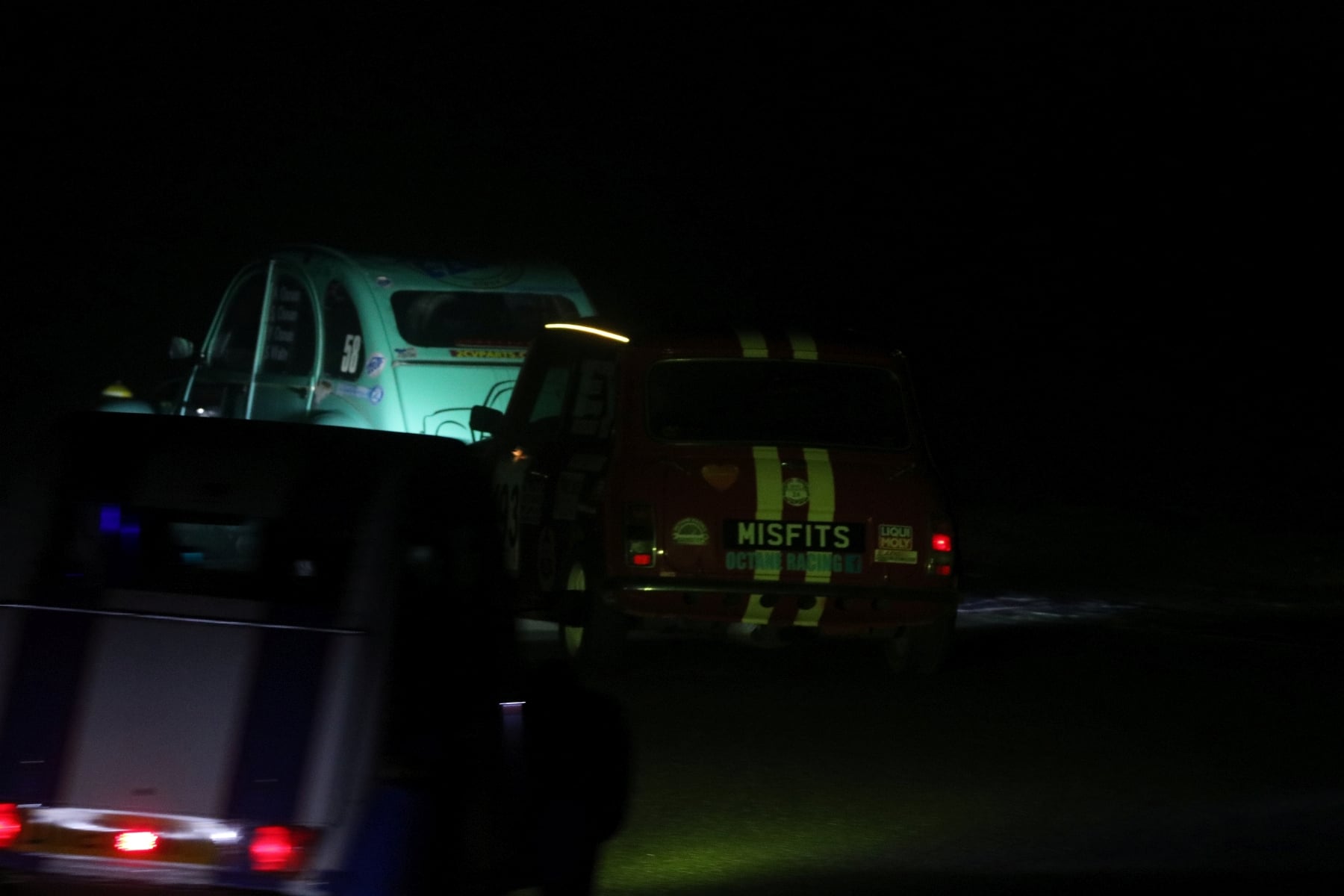 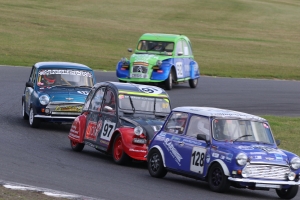 30 cars assembled at Snetterton for this year’s 24hr race, including seven of the popular Mini Grands and a three-car team of 2CV’s from France.

After an afternoon shower it was set fine for the night ahead as the grid formed up, with the Team Toyshed Mini of Elliot Stafford lining up on pole, with Pete Sparrow on 2CV pole for 2CV Lion.

It was Mini’s to the fore as the lights went out with five Mini’s plus Sparrow in an early six car break.

It was the fight for second in the 2CV class that provided the early entertainment, with Pork Pie Racing’s Jon Harmer in a three-way fight with Crisis at Tete Rouge’s Nick Roads and Rally Racers Freddie Martin-Dye. 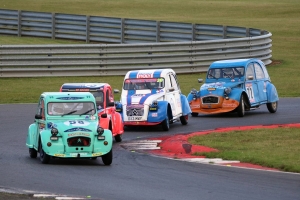 Just behind them Baycon’s Luca Proietti was right on the tail of Crisis at Tete Rouge’s Nick Roads, until he slipped towards another duel between Rose Racing/Walford Motorsports Mick Storey and Twin Snails Paul Rowland.

Heading towards the first hour the leading trio of Mini’s had a slight break, with APO’s Alex Osborne, heading Stafford and Misfits Neven Kirkpatrick, with Sparrow the leading 2CV’s in sixth overall.

Pork Pie Racing, Rally racers and Crisis at Tete Rouge were still circulating as one, while behind them Kris Tovey had moved Beacon Downe into fifth, ahead of Storey, Rowland and Proietti.

The Mini’s started to make their first stops around the 50 lap mark, whereas the leading 2CV’s all exceeded the two hour mark for their first call. 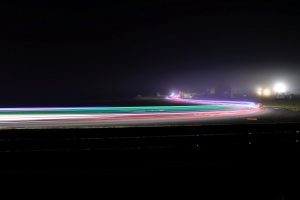 2CV Lion assumed the overall lead and kept their challenge into darkness with both Gary Adnitt and David O’Keeffe taking their turns at the wheel. “We just planned to carry on until we ran out of fuel,” said O’Keeffe. “I had a plan to hold onto the Mini’s, then they fought each other and that helped me more,” Sparrow added.

Freddie Martin-Dye was the last to make a first stop, well over the 2 ¼ mark before handing to Dan Willan.

It was Minis back at the front though, with APO Sport’s Lee Poolman leading and setting a time faster than they had gone in daylight, and just before he handed the car over to Jeff Orford.

2CV Lion were back ahead of the APO Mini on the six hour mark, but the rest of the 2CV class had become more spread out.  Crisis at Tete Rouge were still second with Hugh McCurrich having taken over from Brian Heerey and in third it was Beacon Downe, with Peter Rundle taking over from Louis Tyson. 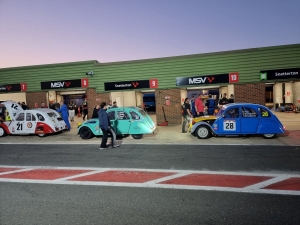 Rosie Racing and Team ECAS were next up with Katy Storey and Martin Sunderland, while DD Motorsport were up to sixth from dead last, with Nick Crispin in for James Dartiailh.

“The gear lever came apart before the start so Sean Sidley had to pit and we burnt the clutch out,” said Dartiailh.

The dramas continued overnight, including a brief race stoppage where the cars were held on the grid after an oil spillage from the Rilii Racing 2CV.

But as we reached halfway all 30 cars were circulating, problems or not and 2CV Lion were back in the overall lead, a lap up on a quartet of Mini’s, led by Slarky Malarky, from Lyford’s, Misfits and APO.

Crisis at Tete Rouge were still running a strong second in the 2CV class, but five laps off the lead. Beacon and Downe and Rosie were duelling for the final podium place, with Twin Snails and DD the rest of the top six in the 2CV Class. 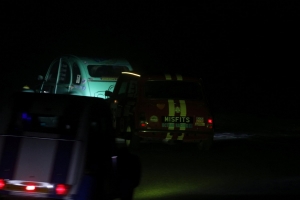 As expected there were plenty of overnight dramas and the usual engine changes, but just before 6am 2CV Lion joined that list. “Gary was out in the car and the crank snapped in half, so we had a 26 minute stop, changed the engine, tyres and refuelled before sending David back out,” Sparrow explained.

The APO Mini had also had overnight problems, “there was a coil problem causing a misfire,” Osborne explained, but they were still third after 15hrs.

Slarky Malarky and Misfits were out in front, split by a lap though. “We are using quite a lot of oil though, but it’s a minor problem,” said Neil Slark.

Following 2CV Lion’s demise it was Crisis at Tete Rouge heading the class, from the former leaders, with Beacon Downe still in third, while Rosie, Twin Snails and DD were the rest of the top six. 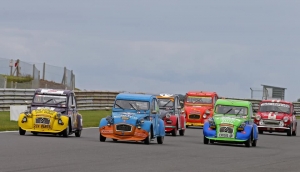 “No serious problems for us, just not as quick,” said Twins Snails Aubrey Brocklebank. “I had to nurse it back to the pits with a broken steering column. I held it together to get it back and then Steve Walford welded it up,” explained Rosie’s Mick Storey.

But more dramas soon followed when Heerey headed pitwards for Crisis Tete Rouge, with the leading 2CV needing an engine change, which then handed the lead back to 2CV Lion.

19hrs down and Slarky Malarky’s three laps lead came to a crashing end. Darren Roberts was focussing on just staying out of trouble, but as he entered Wilson Hairpin, he was followed by Tovey in the Beacon Downe car. The fourth placed 2CV suffered total brake failure and the impact was heavy. Both drivers were ok and remarkably both cars were recovered, they later rejoined. 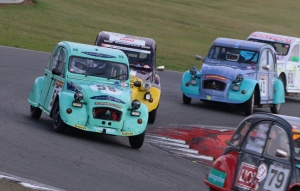 “Things didn’t change much for us overnight for us, I went to bed at 4am we were eighth and when I got back up we were still eighth,” said Hollis Motorsport’s Glenn Burtenshaw.

The APO and Lyford Mini’s both had head gasket problems, so it was Misfits out in front, until Kirkpatrick arrived in the pitlane to surrender a 12 lap lead with a broken gearbox.

As the final hours past, Toyshed finally took the overall spoils. “We had a few tyres problems in the first half of the race, but just relieved to get to the finish and win,” said Chris Slade.

As well as taking the 2CV Class, 2CV Lion were second overall too. “Team work was the high point, everyone gelled,” said Sparrow. “We nearly didn’t win, it was down then up again,” O’Keeffe added. “I think I showed some of the other drivers how it was done still,” reckoned the returning Adnitt.

APO’s Mini was third overall and remarkably DD Motorsport’s fight back netted them fourth overall and second in class, with Rouge slipping to third in class. “I have had second and third before, but been doing this 28 years now and still looking for a win,” said Tete Rouge’s Ian Gibbon. 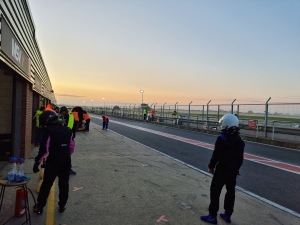