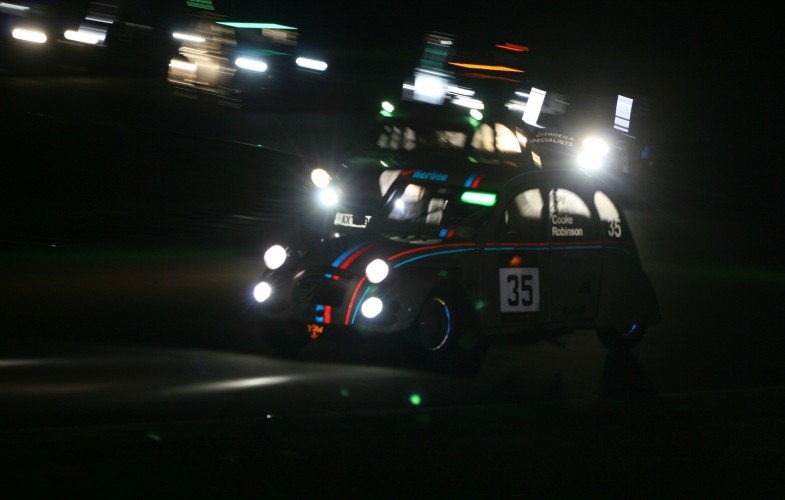 History of the Club

In 1988 a handful of motor-sport loving 2CV drivers went to see the Belgian 24-hour race for 2CVs at Spa Francorchamps; they came back amazed and keen to start racing in the UK.

The 2CV Racing Club was formed and, using modified regulations from 2CV Cross, it managed to get a four-race championship up and running for 1989.

The first race at Mallory Park was well attended with a very respectable grid of 22 cars, all freshly built and ready to go. The race was dominated by ex-2CV Cross drivers with knowledge of 2CV engines and running gear. The winner was former club Chairman Royce Grey.

2CV racing gained immediate recognition for being close, exciting and affordable, these are still the main attractions of 2CV racing. Spectators could not believe their eyes when they saw four cars trying to get round the Esses at the same time with nobody backing off. This sort of spectacle is what has kept 2CV racing alive when other championships have been and gone.

2CV racing cars have been driven by a wide range of people with varying experience from professional drivers to complete novices and a team from the BBC TV programme Top Gear tried their hand in a 24-hour race. The professional drivers include Alan Gow (Series Director of the British Touring Car Championship), Paddy Hopkirk (winner of the 1964 Monte Carlo Rally in a Mini Cooper S), ex-BTCC drivers Ian Flux, Eugene O’Brian, and Phil Bennett, and noted automobile writer Ed McDonough. After racing a 2CV in a one-hour endurance event, Ian Flux was quoted as saying; ‘The Touring Cars Championship would kill for racing like this’. Enough said!

Fast forward to the 21st century and you will find 2CV racing alive and kicking. Our club has kept up with the times, but the same basic principles are still clear to see. We aim to give all drivers a chance by promoting close and fair racing at some of the best circuits in Europe. We want to make our racing as affordable as possible and by having endurance races we keep the costs very low. We also make the racing as family friendly as we can.

In 1990 the first 24-hour race was held at Mondello Park in Ireland. The success of this venture exceeded all expectations and the annual trek to Ireland was a part of the Championship for many years. In fact, most people seem to know Mondello Park as “that circuit where they hold the 24-hour 2CV race”. In 2003 the race moved from Mondello Park to Snetterton in Norfolk, and in 2014 the race moved again to Anglesey Circuit in Wales. It’s a family friendly weekend, with good facilities and opportunities to meet the teams.

24-hour races are an attractive format for drivers, because there are precious few opportunities to drive for hours on a proper racing circuit. Some drivers specialise in 24-hour races and are prepared to travel great distances to take part in their favourite race format; the Snetterton race has attracted drivers from as far away as the USA and New Zealand. The Belgian 24-hour 2CV race takes place each October; it has been run for over 25 years and continues to attract large number of entrants and spectators.

It really is that good to watch!

In some ways the relatively slow speed of the 2CV is a real bonus in that it makes the racing closer. Drivers often take corners two or three abreast and then slipstream the car in front before trying to overtake before the next bend. 2CV racing regularly receives excellent reviews in the motoring press and is very popular with spectators and marshals alike. The racing is fiercely competitive; it is also relatively clean and good natured.

A good day out in a family-friendly environment

You can have a day out with the family enjoying the summer weather, watching some of the closest and most exciting saloon car racing – and you can talk to the teams. If you want to stay for the weekend, there are places to camp or park your motor-home with toilets and basic washing facilities close by; the larger circuits also have showers. You can use the catering facilities, have a drink and cheer on the winners at some of the most attractive race tracks in the world.

Whether you are a potential spectator, driver or mechanic, do come racing because you will really enjoy yourself and you will meet a great bunch of people.