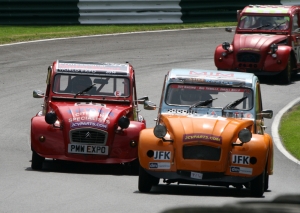 Cadwell Park is a circuit that can bring some surprises, and for rounds 8 and 9 of the 2014 ECAS 2CV PARTS.com championship, that would definitely be the case. The championship battle was almost decided – with the top two contenders of Peter Rundle and Pete Sparrow shading their closest opposition by almost 200 points. However, the battle for the title of ‘Top Pete’ was still to be decided, with Peter Rundle having just an 8 point advantage over Pete Sparrow – sharing the same car over the course of the year, they’ve scored equal points, but points for fastest laps have gone in favour of P. Rundle more times than P. Sparrow.

Qualifying for both races would be on the Saturday in the bright sunshine, and it was Pete Sparrow taking the top spot for round 8, with Mick Story taking a popular 2nd on the grid, followed by Richard Lambert. In 4th place was another popular return for Paul Robertson, Caryl Wills looked strong in 5th, and Lien Davies rounding out the top 6. Julie Walford was flying in 7th place (although a spin for her at Mansfield corner brought out the red flags) and Tony Robinson returned to the championship and qualified 8th. 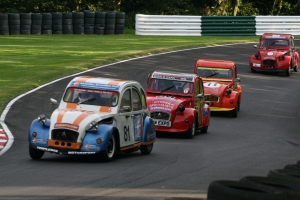 For round 9’s qualifying, the ‘young guns’ were on form, and Matt Lambert took the top spot, followed by Kris Tovey, then Peter Rundle, then Louis Tyson in 4th. Mick Storey brought some experience and wisdom to the grid in 5th, then it was the Gadget team in 6th and 7th with Tom Perry and Simon Clarke. Paul Robertson qualified 8th for this round, and Glenn Oswin 9th.

Saturday night saw another popular return to 2CV racing in the form of the club barbequeue, which was well organised and attended. Thanks to all those who helped make this a success.

Sunday’s races kicked off with round 8, taking place mid-morning with more sunny weather. Mick Storey got a great start and it looked like he was going to lead into the first corner, but he was forced to give best to Pete Sparrow. Meanwhile Richard Lambert was making his way up to the front, and by the end of lap 1 it was Lambert leading, followed by Sparrow, then a hard charging Caryl Wills up from 5th. By lap 4 Wills had fought his way into the lead, with Sparrow keeping him honest, and Lambert slipping back a little in 3rd. This battle would continue at the front for several laps, with the lead changing several times over the course of a lap! 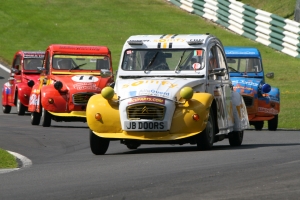 Meanwhile, further down the field, Mick Storey pulled out of the race, with fuel pickup problems, and Julie Walford tumbled to the back of the pack on lap 1, but she was able to recover. Paul Robertson decided the hairpin wasn’t exciting enough and spun himself around, rejoining with no damage. Back at the front, 3rd and 4th places had settled down in favour of Lambert and Davies respectively, but Wills and Sparrow were still at it. Sparrow would lead in the latter half of the lap while Wills would lead for the first half of the race. Sparrow would audaciously outbrake Wills into the Mountain corner each lap, but on the last lap Wills held it into the Mountain, and finished the lap – and therefore the race – in front of Sparrow. This was Wills’ first win in 2CV racing, and he was understandably delighted! Fastest lap went to Pete Sparrow, which would level out the points between himself and Peter Rundle.

For round 9, Wills’ #36 car would be out again, but this time in the hands of young charger Kris Tovey, who wasted almost no time in getting to the front of the field. The #97 of Pete Sparrow – taken over by Peter Rundle for the second race – was not in its customary position at the front, and it quickly became apparent that all was not well with the car. Rundle slipped back to the bottom of the field for a few laps, but strangely the car’s performance improved on lap 4, and Rundle was able to charge again. Sadly for him the gap to the leaders was too big, so he elected to let himself be lapped by the leaders, in order to attempt to get the fastest lap – this would enable him to extend his points lead over Sparrow. 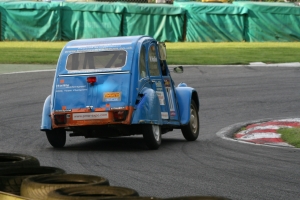 With Rundle’s problem taking him out of the lead battle, Matt Lambert inherited 2nd place, and kept Tovey at the front honest, at least for 5 laps. At this point he lost the tow and dropped back to over a second behind. Mick Story was a constant presence in 3rd, as was Paul Robertson in 4th. 5th belonged to Steve Walford for most of the race, but problems befell his car and he retired on lap 7. Other retirees were Nick Crispin after 3 laps, and Simon Clarke, who didn’t complete a single tour.

With Walford’s demise, the battle for 5th was taken up by Oswin and Tom Perry in the #24 car. Perry was able to squeeze past Oswin on the 8th lap, and by lap 10 was putting some serious pressure on Robertson for 4th. It was not to be though, with Robertson retaining 4th place, ahead of Perry and Oswin. Matt Hollis finished 7th and Louis Tyson 8th, the two of them enjoying each other’s company for most of the race. Adam Bollons finished 9th after a sluggish start, and Tony Robinson rounded out the top 10.

Back at the front though, it was an almost easy win for Tovey, who came home in front of Lambert by just over 8 seconds. Again, it was his first win in 2CV racing, and showed that the car and its drivers are a serious threat in the championship. Meanwhile, Rundle was unsuccessful in his attempt to steal fastest lap, and so the two Petes left Cadwell Park on equal points in the championship. 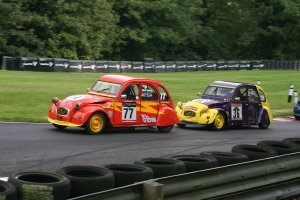 With only one more race to go – the 24 hour race – which Pete will triumph for the 2014 championship?

TSL timing sheets from the event 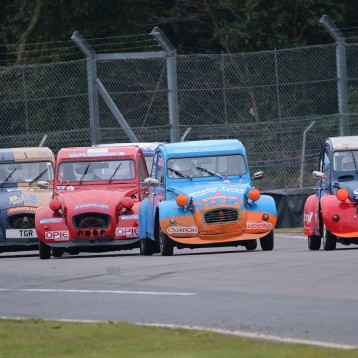 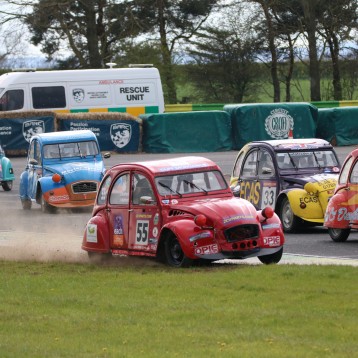 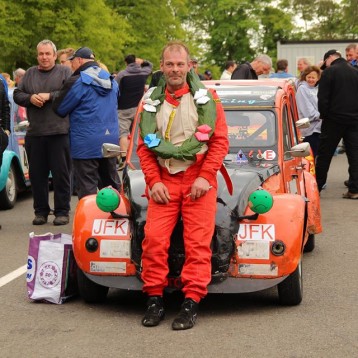