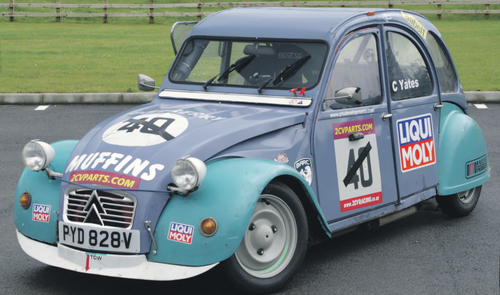 Article by Ian Seabrook, contributor to Classic Car Buyer magazine, who have kindly given us permission to reproduce the article here

People really will race pretty much anything with a motor, whether it’s lawnmowers, power tools, trucks or even one of the slowest cars ever sold in the UK. The 2CV Racing Club has been proving doubters wrong for over 25 years now, and we first got involved in the mighty, annual 24-hour race last year – you may recall that I joined a pit crew and, after an exciting night of repeated problems, our car finally came home in 15th place. 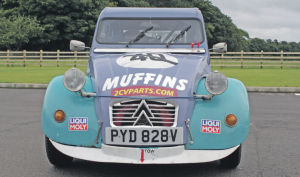 The front splitter means this is a proper race car. Doesn’t it?

That car is owned by Chris Yates, who runs the Blueberry Muffins team with fiancée Maria Cooke, who acts as team manager. Chris had only bought the car a few months before last year’s race. With lessons learnt from that adventure, he’s hoping for better luck this time. Part of that preparation has included making the car road legal so hecan carry out engine testing on the road. After all, even with a race-spec makeover, this car is unlikely to lead to too many speeding convictions…

An invitation to take a spin in the car I’d helped nurse through an entire day of racing was not one I was going to refuse. I headed up to Chris’ home in Cheshire and reacquainted myself with a 2CV nothing like my own. First of all, Chris reminded me of the changes necessary for racing. The most obvious are the rather drastic lowering of the suspension and the big, beefy roll-cage inside. Most race cars have their interiors stripped out, but there’s not much inside a 2CV to start with. 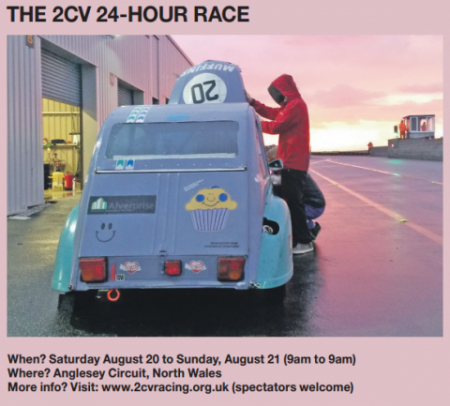 That means that really, it’s just had a lot more stuff added. Ahead of the driver, there are gauges showing engine revs, cylinder head temperature and the fuel level. There’s also a device that shows when the engine is approaching maximum revs, and it includes a rev limiter – set to 6800rpm in this case. There is also a digital clock, as it’s generally considered that a full tank gives enough for two hours of racing. Switches are scattered about and, oddly, there’s a column stalk from a Nissan mounted on the ‘wrong’ side of
the steering column. It controls indicators, lighting and yes, it’s upside down. That’s a legacy of its previous ownership, but it
does seem to do the job well.

A speedometer is not required for racing, though Chris has fitted one for road use. It’s been relocated right at the nearside of the dashboard. Also over there is a custom panel made by Chris, which houses resettable fuses, a voltmeter, an air mixture readout, a lap timer and a few warning lights. Here is where you’ll also find the master key and ignition switch. There is no key. 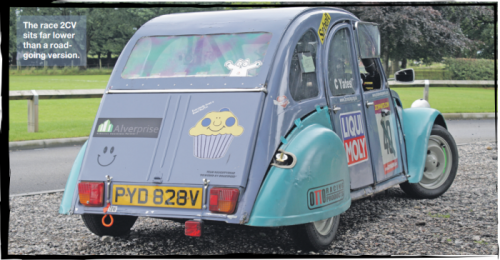 A substantial racing seat is fitted, with a full six-point harness. There’s also a fire extinguisher, which is plumbed in. The driver need only pull a small lever to set it off. Down the side of the seat is a conventional handbrake, as the driver would be unable to reach the normal umbrella handle, which is normally mounted beneath the dashboard. The gear lever has been extended too, as the driver sits much further back.

SUSPENSION MODIFICATIONS
In terms of suspension mods, the car has obviously been lowered by a huge amount. Much stiffer springs are fitted, along with gasadjustable dampers. At the front, the suspension arms are cut and rewelded, with extra stiffening for the kingpin housing. This changes the steering geometry to suit the lower ride height, and allows for a little negative camber to be dialled in at the same time. 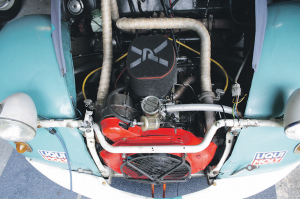 The engine benefits from a Weber carburettor and club camshaft, but has a stock crank.

At the rear, the arms are modified for a little negative camber, but the arms are otherwise unmodified, bar the fitment of anti-droop straps. That makes it easier to jack the car up, as the arm would otherwise remain on the ground even if you’ve jacked it up a good amount!

Engine modifications are fairly restricted and you must start with a standard 2CV engine. BMW replacements are not allowed, unlike in the Belgian race series. You are allowed to use the club camshaft, which has a very well defined specification, but you must use 9:0 pistons (the same as found in the Citroën Dyane) and the standard bottom end. You are allowed to modify the ports for smoother airflow, you can use a Weber DTML carburettor and you can modify the exhaust. Chris’ car has a two-into-one  system that flows much more cleanly than the standard item. There is also a lightened flywheel.

The gearbox must be standard, though many teams (including Chris’) fit heat sinks to help dissipate heat from the inboard disc brakes. Linkage changes are allowed.

Bodywise, the race car must share the silhouette of the standard 2CV, though a front chin spoiler is allowed. Polycarbonate can be used for the side and rear windows, but the roof must be metal. The entire front end of the Blueberry Muffin has been reworked to be released quickly, and so have the rear wings. These are all prone to damage as 2CV racing can be very close!

STRAPPED IN
This is all well and good, but what is it actually like to drive? First of all, I have the difficulty of getting in. The removable steering wheel certainly helps, but the chunky roll bar really does get in the way. I sort of fell into the seat and set about strapping myself in. This takes some time. Then, I turn the master key, flick on the ignition and press the starter button.

A mighty roar filled the air, in a way I’m not used to in a 2CV. It sounded familiar, but also very different. The lighter flywheel means the engine revs as soon as the throttle is pressed. Despite the cold start, the engine, which does not benefit from a choke,
soon settles down pretty nicely to a menacing burble. 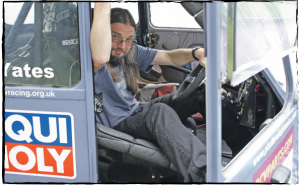 As we headed out onto the road, things got a lot louder. Panels reverberated, the engine and transmission screamed and the exhaust roared its intent. People turned around, pondering what exotic beast was hurtling along the road. Curiosity turned to confusion as they clapped eyes on my little race car, or perhaps they were laughing at my gearchanges. The additions to the gear linkage seemed to have made it much more difficult to change from first to second –something the racers only tend to do at the start or when leaving the pits. Second to third is a nice, straight run.

The power was a little disappointing. Chris reckons 44bhp is available at the wheels,which is a considerable increase over the 29bhp the 2CV would have originally had. However, I’ve driven a 2CV with a 100bhp motorbike engine, and frankly nothing prepares you for the astonishing acceleration that generates! Certainly, the race car is much perkier than a standard 2CV though, and easily capable of surprising folk in their modern cars.

Does a race 2CV make a good shopping car?

The ride is, without any surprise, rather on the firm side. Ground clearance is an issue too,and a particularly harsh pothole that I failed to avoid did drop the car sufficiently for it to scrape. I’m used to being able to charge speed humps in my 2CV. That isn’t an option here. It’s not very comfortable. Getting back out onto open roads, I can let the engine rev right up to the limiter. The 6800rpm maximum is considered fairly conservative – some rev as high as 7500rpm. That’s pretty impressive given the mostly-standard engine innards, and shows you just how overengineered these little cars were. The brakes demonstrate that too– almost entirely standard, they’re nonetheless very effective indeed. 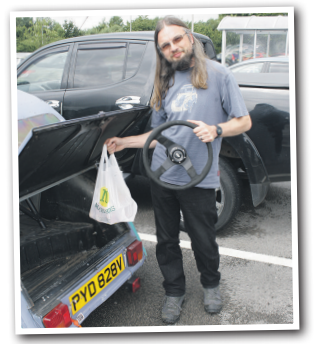 STRANGE HANDLING
To a seasoned 2CVer, the handling is rather strange. There is barely any bodyroll at all. Instead, the race 2CV changes direction like a Mini. Handily, Toyo 135 roadtyres are the compulsory tyre, which is what I use on my own 2CV. You can certainly push on much more than such a narrow tyre should allow you to. The downside to better body control is that the back end can become a little wayward. Forces normally absorbed by crazy angles of lean can just unsettle the rear when that lean is removed. I’m very careful not to lift mid-bend. As I pull into a supermarket car park, I’m struck by how magnificently docile the race 2CV is. Sure, it’ll occasionally cough and splutter when you first try to accelerate under 3000rpm, but it is actually happy to pull from low down, and will potter around on gentle throttle with no fuss at all. Reversing is another matter though. The racing seat has huge side bolsters to cradle the driver’s head, while the door mirrors are not exactly generously sized, despite being the correct 2CV ones. I somehow manage to get into a space, and now must consider a new conundrum. There are no door locks fitted, and no ignition key. I can’t remove the master key, because it’s tied via a cable to a switch on the outside. The solution? I just took the removable steering wheel with me! Sorted! On my return, I discovered plenty of luggage space, making the race 2CV more practical than you might think. I’m keen to climb aboard again, even though it takes quite a while to do so. There are more roads to explore and as bouncy and uncomfortable as it is, this race car is making them very enjoyable. It’s hardly practical, but it is huge fun. Just imagine driving it for 24 hours! 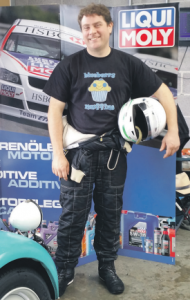 Chris is a seasoned 2CV racer who has previously won the 24-hour event. He is busy preparing the car, and will share the driving with two other drivers. Chris currently stands in 15th place in the 2016 2CV Racing Drivers’ Championship out of 38 runners. He highlights one key difficulty at the 24-hour race: “Drivers are allowed to race for up to three hours in a stint, but we can only carry enough fuel for two hours of racing. Generally, to win, you need to make less stops than the other teams.”

When? Saturday August 20 to Sunday, August 21 (9am to 9am)
Where? Anglesey Circuit, North Wales
More info? Visit: www.2cvracing.org.uk (spectators welcome) 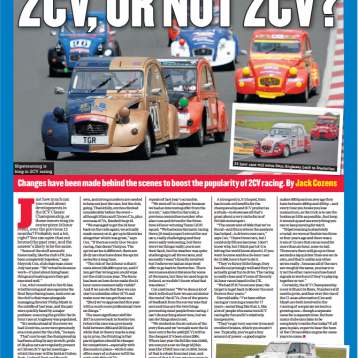 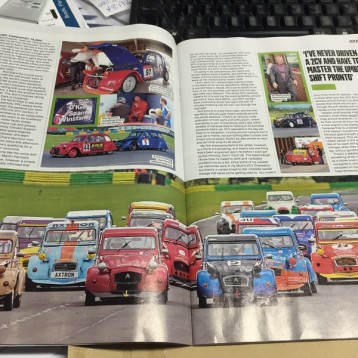 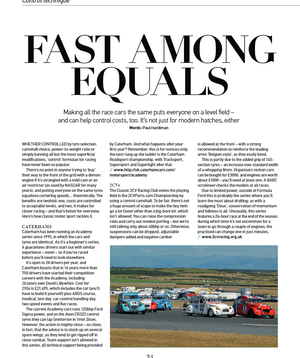