Crispin makes it a double at Brands Hatch 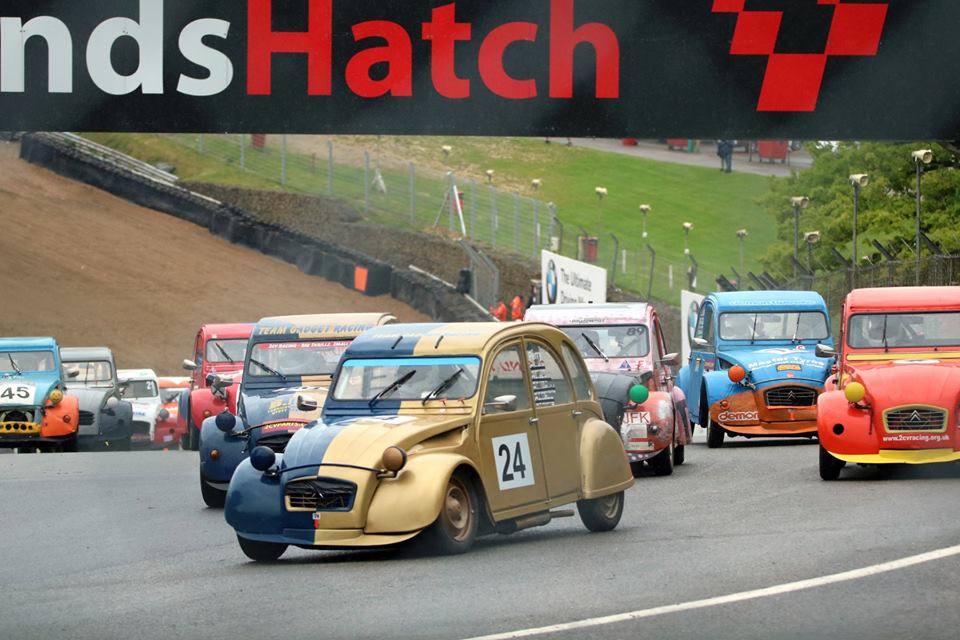 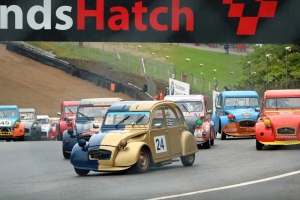 No one seemed more surprised than Nick Crispin to secure a double win at a soggy Brands Hatch.

Only 0.680s covered the top seven in qualifying for the first race of the weekend, with Sandro Proietti leading the way from Lien Davies, Crispin, Matthew Hollis, Pete Sparrow, Ainslie Bousfield and Mick Storey.

But as the grid lined up the dry conditions of qualifying had turned to continuous rain and a very wet track.

It was defending Champion Davies that led the charge through Paddock, before Crispin nosed ahead into Druids. But Sparrow had the edge out of Graham Hill Bend only to run wide through Clearways and hand the advantage back to Crispin.

As the lead trio began to break away, Proietti, Matthew Hollis, Alec Graham and Mick Storey disputed fourth, while Bousfield fell back having led the group on the opening lap. 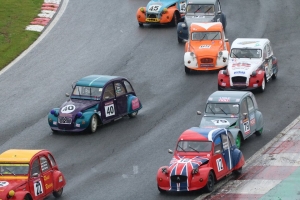 Hollis spun exiting Paddock on lap four, but a couple of laps later Crispin had a scare at the same spot, which brought Sparrow back onto his tail again. They continued inches apart over the next lap, but Crispin held on until the safety car was scrambled with Nigel Hollis off exiting Paddock.

Proietti had been fourth behind the safety car, but from the green flag rocketed into the lead, only to run wide through Clark Curve a lap later, dropping to third behind Crispin and Sparrow again.

The lead duo got away again as a queue formed behind Proietti. Davies led the pursuers which had grown to seven cars by the end of lap 12.

Crispin had managed to break the tow again from Sparrow, but the action behind went right to the flag. Crispin held on but Sparrow headed for the pitlane on the last lap after being black flagged for not having a fuel cap. “No idea why my car went so well compared with earlier. The pressure was on though and I really messed up the restart,” said Crispin. “I had started the race without the fuel cap on and was spilling fuel out, so got the warning flag,” added Sparrow. 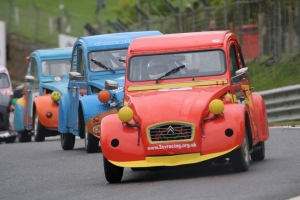 With Sparrow not classified, Proietti off at Clearways two laps from the end, which also caught out the recovering Hollis, Davies’ engine had cut out and Graham had clipped Storey and spun him exiting Paddock, it was David O’Keeffe’s stealth that netted second, from Graham, Nick Roads and Hollis. “They all seemed to get quicker after the safety car, I stayed calm and they started to fall off,” O’Keeffe explained.

“It had been a difficult race with Pete’s fuel spilling onto a wet track, but thought third would be OK. I had a gap, some contact with Alec and the engine cut out,” Davies explained. “I had an awesome restart, they all seemed to slow as we got to the line and I went for it. But I kept losing the back end, held it then spun and Matthew caught me,” said Proietti. “I had spun earlier and then caught Sandro and lost it again,” Hollis confirmed.

Michael Fox completed the top six, with Storey recovering to hold seventh. “I was OK until the safety car and then everyone closed up. I was running OK again though until there was a big bang when Alec hit me,” Storey explained. 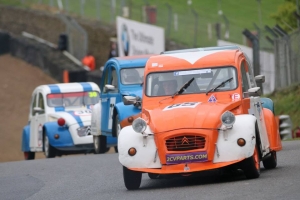 Brent Savage, Chris Yates and a “popping and banging” Bousfield rounded off the top 10.

It was still wet for the second race too, but Sparrow and Tom Perry shared the front row, from Storey, Simon Clarke, Fox and Matthew Hollis.

As the lights went out Sparrow held his line to lead through Paddock, with Perry initially second, from Crispin, Storey, Hollis and Clarke.

As Sparrow tried to stretch the field Crispin and Storey exchanged over second and third, similarly Hollis and Perry for fourth and fifth, as Clarke began to lose ground on his rivals.

The safety car was out on the third lap however and closed it all up again, before going green after two laps. While the top four held station, Gadget team mates Perry and Clarke began a duel for fifth.

Gradually Storey began to close in on Sparrow’s lead, leaving Crispin and Hollis duelling for third. But as the leader responded the third placed duo began to reel in Storey.

Crispin went for the inside line through Clearways with Hollis following and as they stormed passed the pits Storey was down to fourth and soon being caught by Perry. 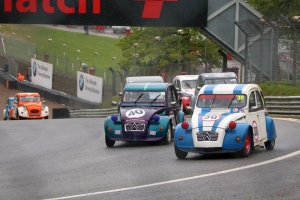 With time running out it suddenly became any one from five for the lead after Storey had fought back to retake Crispin and Hollis two laps from home. Rounding Clearways for the penultimate time Crispin was second and inches from Sparrow, while Storey was in there too.

Perry had been in contention until his engine cut out on the last lap, but at the front Crispin just had it, securing a double win with 0.254 secs to spare over Sparrow and Storey. “I had a good start, but Pete broke the tow and we were all battling. Once I had got away from Mick and Matt I just chased for the lead, then I tripped up with a backmarker at Graham Hill Bend and Mick was there again to retake me. I managed to get him back and then just out dragged Pete to the line, great,” said Crispin.

Hollis came home fourth, “it was so nip and tuck on those last few laps and I couldn’t get through the backmarkers so well to challenge the leaders,” he admitted.

Clarke held on for fifth, from the closing O’Keeffe, while Graham, Marc Grasby and Proietti completed the top 10.

The 2CVs will be back in action again at Oulton Park on June 23rd.