Double for Sparrow at Silverstone, 2019 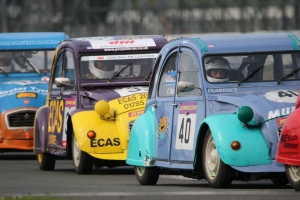 HAMPION SPARROW AT THE DOUBLE
Reigning 2CV Race Champion Pete Sparrow started his title defence in the best possible way, with a double win in the opening rounds at Silverstone.
Having qualified on pole for race one, Sparrow was never headed and comfortably headed home Brian Heerey by well over four seconds.
But the action behind went right to the flag, with a three-car battle for third.
Lien Davies had led the battling trio, but headed pitwards with a blown engine on his second lap, leaving Nick Clarke with a slight advantage over Nick Crispin and Matthew Hollis.
Clarke had become to look established in third, as Crispin and Hollis continued their duel, but working together they eased closer and closer to Clarke again.
For a while there was a battle on for sixth too, before Martin Riman eased his way through from a back row start, leaving Marc Grasby, Chris Yates, Julie Walford and Mick Storey to dispute the remaining top 10 places.
By lap six Hollis and Crispin had continued their pursuit of Clarke and were poised to challenge for third. Both went by a lap later and Clarke found himself at the back of the three car train.
They continued to trade places for the rest of the race, which brought them closer to second placed Heerey too. 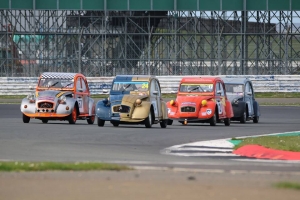 But at the front Sparrow was able to ease to the flag for win number one of 2019. “The car is so fantastic, but I had expected Brian to have a tow. So I just kept my head down and kept going,” he said.
“I was worried towards the end that the others would catch me, I had a good start but could see they were working together,” Heerey added.
Although Clarke had regained third place on lap nine, he couldn’t hold it and lost out to both Hollis and Crispin again two laps later. He managed to snatch fourth back from Crispin, after taking Club side by side on the last lap, but it was Hollis completing the podium finishers.
“I lost ground on the second lap, miles off at Stowe after trying the outside which didn’t work. A hard race though after a good start,” said Hollis.
“I had missed a gear at the start,” said Clarke who had been down in sixth at the end of the opening lap. “Then I was clear but they came passed like a train, then I couldn’t get away. But I knew it was the last lap, Matthew had the inside at the last corner but I got Nick,” he added.
So it was Crispin’s newly liveried garden shed that lost out in the battle, “I was quicker on the Hanger Straight, but then lost time in places, great race though even though my brakes were stuck on,” he said.
Although Riman had consolidated sixth, the fight behind went to the flag too, with Yates just having the edge over Storey and Nigel Hollis, while Walford and Grasby both lost out to come home 10th and 11th respectively.
“I had a plan to get around Julie on the Hanger Straight, but when I tried it the first time Marc Grasby got us, but after the second attempt I got away,” said Yates.
Eighth placed Storey felt he had a problem though,” it just wouldn’t go,” he reckoned. Ninth though was Nigel Hollis’ best finish, but it was at the expense of Julie Walford, who lost two places on the last lap.” Remarkable start, but I lost places and the train went by,” she said. 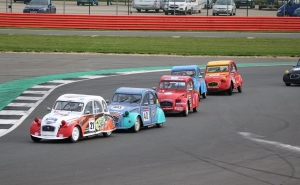 So there was no top 10 for Grasby either, “Julie reversed into me at Village,” he reckoned.
With Sparrow starting at the back of the grid with a 10 second penalty due to a technical issue, the second race was bound to be interesting.
After Storey had led the opening lap, there was a reshuffle at the top, but it was still 10 in a row for the lead, which played straight into Sparrow’s hands.
Nick Roads and Crispin both led, before Storey was back in front on lap four. Simon Clarke followed, from Roads and Crispin, but Sparrow had already climbed to fifth.
They were all still in a line, which allowed Sparrow to pick off the whole of the lead quartet to lead at the end of the next lap. “I can’t say I passed them all, some just moved over,” Sparrow admitted.
He soon made his lead decisive again as the battles behind ensued. Clarke and Roads fought over second, with Storey in fourth, while Crispin and Richard Hollis disputed fifth and Steve Walford/Glenn Oswin seventh. 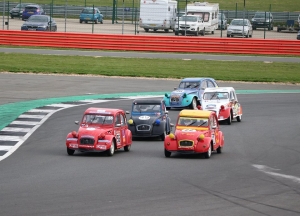 Storey managed to latch onto the second placed duel again, but it was now four for fifth too, with Walford heading the quintet, from Crispin, as Oswin and Hollis both lost out to Yates.
But there was confusion after 11 laps when the red lights showed on the startline gantry. Everyone rightly slowed, but there was no stoppage and the lights went out again.
A further slow lap was completed line astern before the chequered flag heralded Sparrow’s second win of the day. “Really enjoyed that too,” he said.
Although Clarke and Storey joined him on the podium, Roads was hoping to make a last lap challenge. “We borrowed Nick Roads spare engine and beat him. I was quite pleased to see the flag though,” Clarke admitted.
“I had let Mick through at Stowe and thought I could get him back later, but then the red lights came on,” Roads added. “A good battle but I had been saving myself for the last lap too,” Storey replied.
Walford and Crispin completed the top six, with Oswin and Yates still in close proximity duelling for seventh. Richard Hollis was ninth, while a further battle to complete the top 10 had Aubrey Brocklebank finally fend off Nigel Hollis. 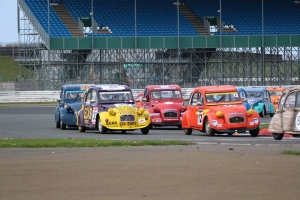 “That was a big scrap and the tow wasn’t working on the Hanger Straight as the wind was behind us,” Walford explained.

Published by Peter Scherer for the 2CV Racing April 1st 2019. 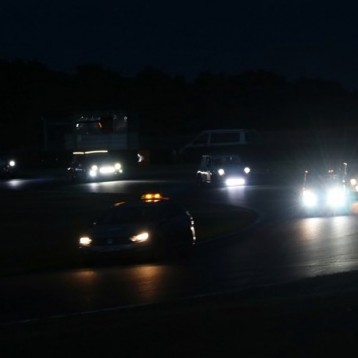 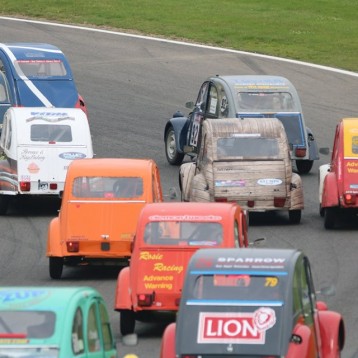 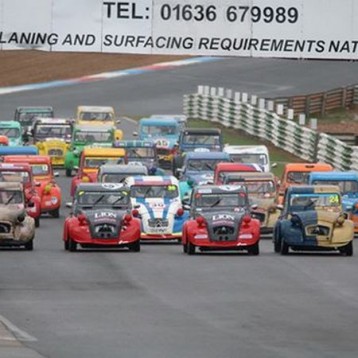