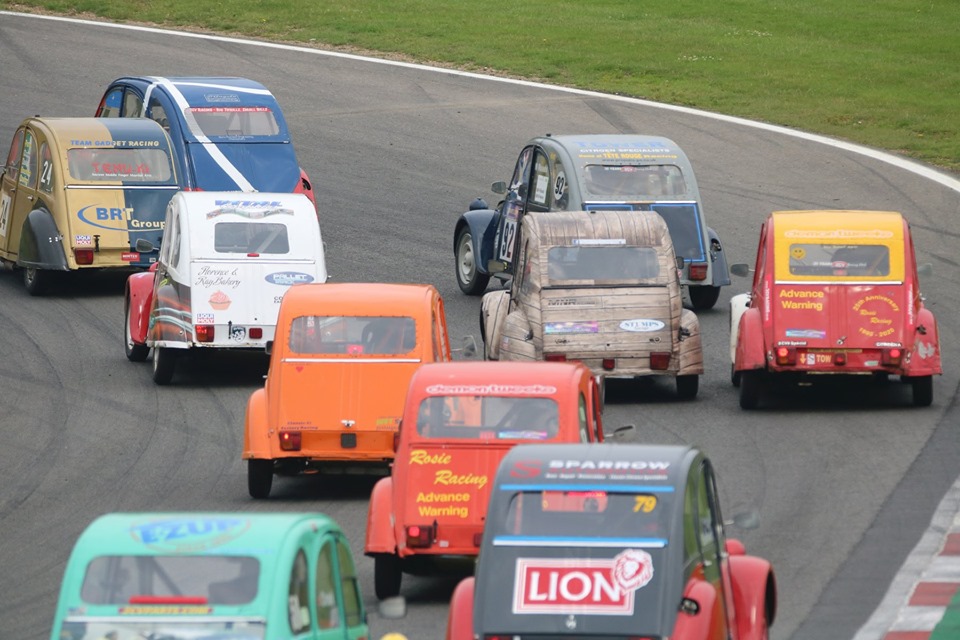 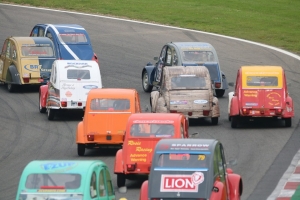 It was probably one of the most competitive 2CV Racing weekends ever at Brands Hatch, with defending Champion Pete Sparrow and former Champions Alec Graham and Lien Davies locked in combat throughout both races.

Sparrow had the first lap lead in race one from pole, with Davies, Graham, Brian Heerey, Marc Grasby and Nick Crispin the initial top six.

But with Katy Storey rolling, the safety car was out on lap two, but almost caught out Heerey and Grasby who went into Druids side by side. “We were with the lead bunch and I didn’t see yellow flags, then I saw the cars in front almost stopping and went onto the grass when I hit the brakes,” said Heerey. “I had got Nick Crispin and Martin Riman at the start, saw the crash but not the flags, and tried a do or die on Brian into Druids,” Grasby added.

After three laps the green flag was out and both Sparrow and Davies got away again, with Graham back to make it three from lap six. Crispin was also on the move, retaking Grasby for fifth, before ousting Heerey to a lap later.

“I had missed the restart, so Marc got away and I had to work hard to get him back and challenge,” said Crispin.

Sparrow had started to increase his lead as Graham and Davies swapped. “I knew Lien was close and watched him and Alec going through Paddock. I was aware of anyone trying the inside at Paddock, but I was concentrating on the corners and they had me for pace on the straights,” Sparrow explained.

But with two laps to go Sparrow was out when a valve broke, leaving Graham to take the win as they reached the flag inches apart, or officially 0.263 secs.

“I didn’t expect to go quite so well, but it wasn’t a bad start and I got two places fairly quickly. I sat behind Pete and Lien and for a while struggled to stay with them, then I got Lien into Graham Hill Bend, but couldn’t have done anything about Pete,” said Graham.

“We were all very respectful and gave each other room, then I stayed behind Alec to try and push us back to Pete’s lead,” Davies replied.

Crispin just held onto third from Heerey, “we couldn’t get near those front ones, but I had to work with Brian to try and close, as well as defending my place from him,” Crispin added. “I didn’t realise it was the last lap though, or might have had a go at him,” said Heerey. 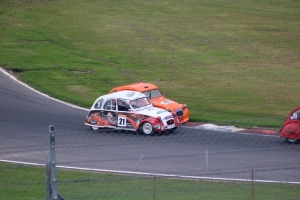 Grasby recorded his best finish to date with fifth. “I was OK then Mick Storey started to come back at me, as I was having trouble staying near the back of the pack ahead. It was a long last lap as Steve Walford and Storey closed in after they swapped at the end,” he said.

Sparrow had a change of engine before taking up pole for race two and lost out to Davies and Graham on the opening lap. “It didn’t have the same power though,” Sparrow admitted.
But the safety car was out again after Roy Eastwood had rolled, but Graham had just nipped ahead before the cautionary period started.

After two laps though the race was on again and Sparrow had made it three for the lead, a battle which went right to the flag. 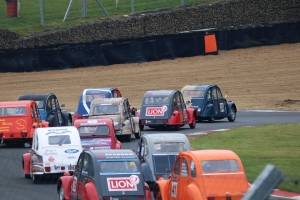 “I really had to work hard for that, it was a fantastic race,” said the victorious Sparrow after he led from lap six, despite losing out on more than one occasion to Graham too.

But Graham had to settle for second this time, “after the green flag Pete was really on the pace, but just like the first race there was absolutely nothing in it. We were three abreast through Paddock again, and the lead could change two or three times in a lap. That then allowed Kris Tovey to close when we were fighting,” said Graham, who was 0.977 secs away from a double victory.

“I just got to the point that I didn’t care who won it, just brilliant to part of it. I tried to win and when Pete got away, I worked with Alec to get back,” said Davies after completing the podium.

Tovey had held fourth throughout and was just over a second away from joining the lead trio. Crispin was fifth after a solitary race, “boring for me really. I could only keep with the first four for a few laps, then dropped back and lost power. “I had a healthy gap to the next group though, so just nursed it home,” Crispin explained.

It was any one from five for sixth however, with Julie Walford, Riman and Grasby all have a taste at the front, along with Mick Storey.

“I was well up at the start, then dropped back into the five car battle. I thought I had a gap but then Mick tried to get around the outside at Paddock on the last lap,” said Grasby as he just held onto sixth place.

Storey was therefore seventh, with Riman, Walford and Nick Roads completing the top 10.

The final round of this year’s Championship is at Snetterton, where the 24 hour race takes place August 16-18.