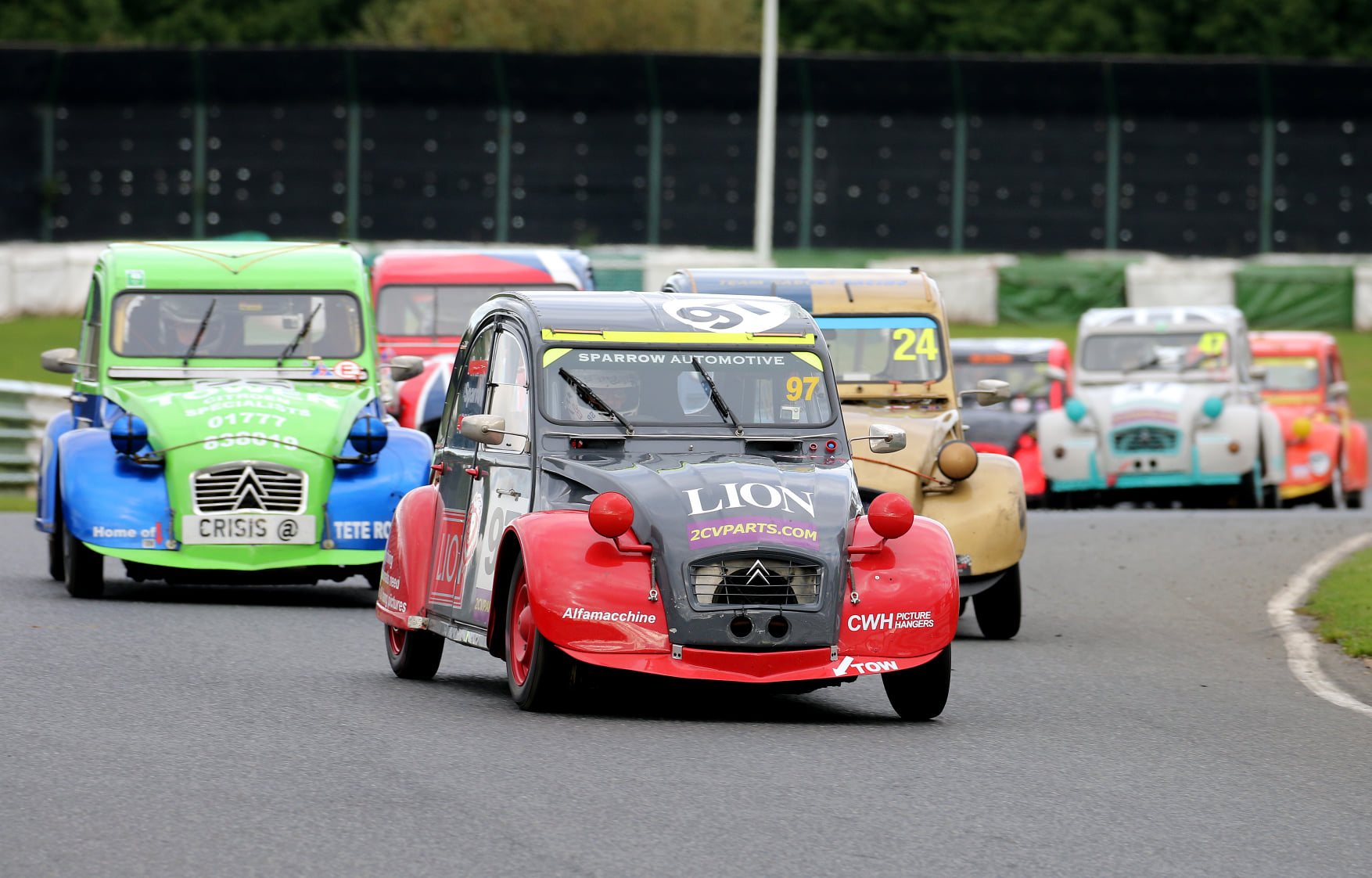 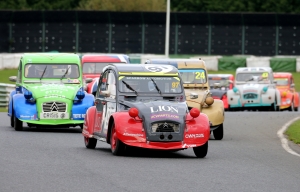 Multiple Champion and 2CV Racing Legend Pete Sparrow, won both races as the short but entertaining season came to a close at Mallory Park.

But in an immediate reshuffle Graham and Proietti both ousted Davies, with Sparrow down to fifth behind Dartiailh.

The changes continued as a four car break began to appear, with Davies reclaiming the lead for a while, before surrendering to Sparrow on lap six.

“When Alec started to drop back it became a real dog fight, but Pete Sparrow got to the front and went for it,” said Davies. 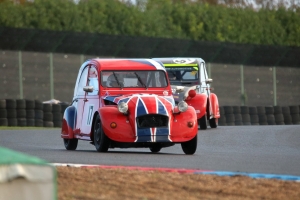 Nick Roads had joined in with Davies and Graham, but Proietti had hit trouble on lap three and fell well down the order. “I had trouble in qualifying, so was coming back through and when Sandro lost the rear and went off at Gerards, that helped me,” said Roads.

“I had got up to second into the Esses, but was too quick into Gerards, the rear end went loose and I fell off,” Proietti admitted.

Dartiailh had also lost ground, but fought his way back passed Glen Oswin and Mick Storey into fifth, before demoting early leader Graham on lap eight.

Back at the front Sparrow and Roads had managed to break the tow, leaving Davies a solitary third. “I should been able to hang on, but my steering rack was worn and the front wheels wobbled, but I thought I was safe in third,” Davies added.

Dartiailh’s charge had continued however, and he began to reel in Davies and on lap 14 he was through, but couldn’t consolidate his newly earned place. So it was Davies that finally claimed the place into the Hairpin on the last lap, well adrift of leaders Sparrow and Roads. 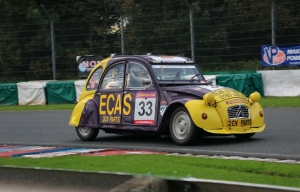 “I had the pace to stay with Pete but not to overtake him,” Roads added.

Oswin managed to take Graham for fifth on lap 15, while Storey was on his own in seventh. The recovering Proietti, David O’Keeffe and Nigel Hollis rounded off the top 10.

It was Davies to the fore again at the start of the second race, with Sparrow, Proietti, Graham, Nick Crispin and Roads in formation behind. Initially though Storey and Graham had been up there, until Storey had a touch, lost it and dropped to seventh.

But on the second lap Sparrow managed to not only get the lead, but started to make a decisive break as Luca Proietti, Davies, the recovering Graham and Roads all contested second place. “There was quite a bit of contact and Alec tapped Luca and dislodged his wing,” said Davies.

Proietti and Graham briefly got away in second, with Davies trying to hold on, while in fifth Roads and Crispin were duelling too. 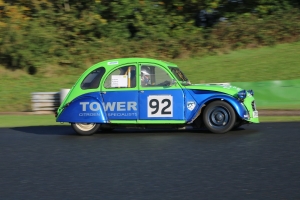 As Sparrow’s lead grew, the second place duel allowed Davies to join in again and on lap six he had passed them both.

But Davies’ moment only lasted a lap, as both Proietti and Graham retook took him to continue their private duel.

The fifth place battle managed to close in on Davies, but he fought back to rejoin the second place scrap again, but this time took Roads and Crispin with him.

It was all change again on lap nine though, with Davies falling to sixth, as Crispin had found a way passed both him and Roads.

By the end of lap 10 Sparrow’s lead was over three seconds, but only 0.144 secs split Proietti and Graham.

Davies was out though, which left Crispin and Roads to fight over fourth, promoting Oswin and Storey into the fight for sixth. 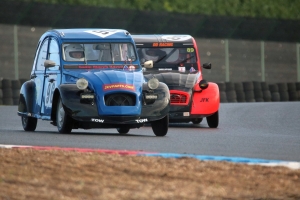 “I had gone across the Esses with Nick’s Crispin and Roads and then the car wouldn’t turn in at the Hairpin, so I limped back to the paddock,” Davies explained.

With Sparrow safely on his way to his second win of the day, all eyes were on the fight for second, with Graham back ahead of Proietti from lap 12.

With three laps left Roads had sneaked back ahead of Crispin yet again, as both caught the second place fight. “Nick missed a gear at the Hairpin and we had both been across the Esses. We lost a bit of ground but caught up again,” Roads explained.

Proietti joined the casualty list, having been ignoring a black and orange flag, which then became black. His wing had been flapping for most of the race after contact from Graham, so it became a three-car battle to settle the podium places.

Sparrow had backed off but still had 2.224 secs in hand, while only 0.643 secs covered the next three, with Graham just holding on 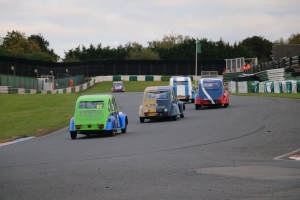 from Roads and Crispin.

When all the points were totalled it was Alec Graham that was crowned 2020 Champion.