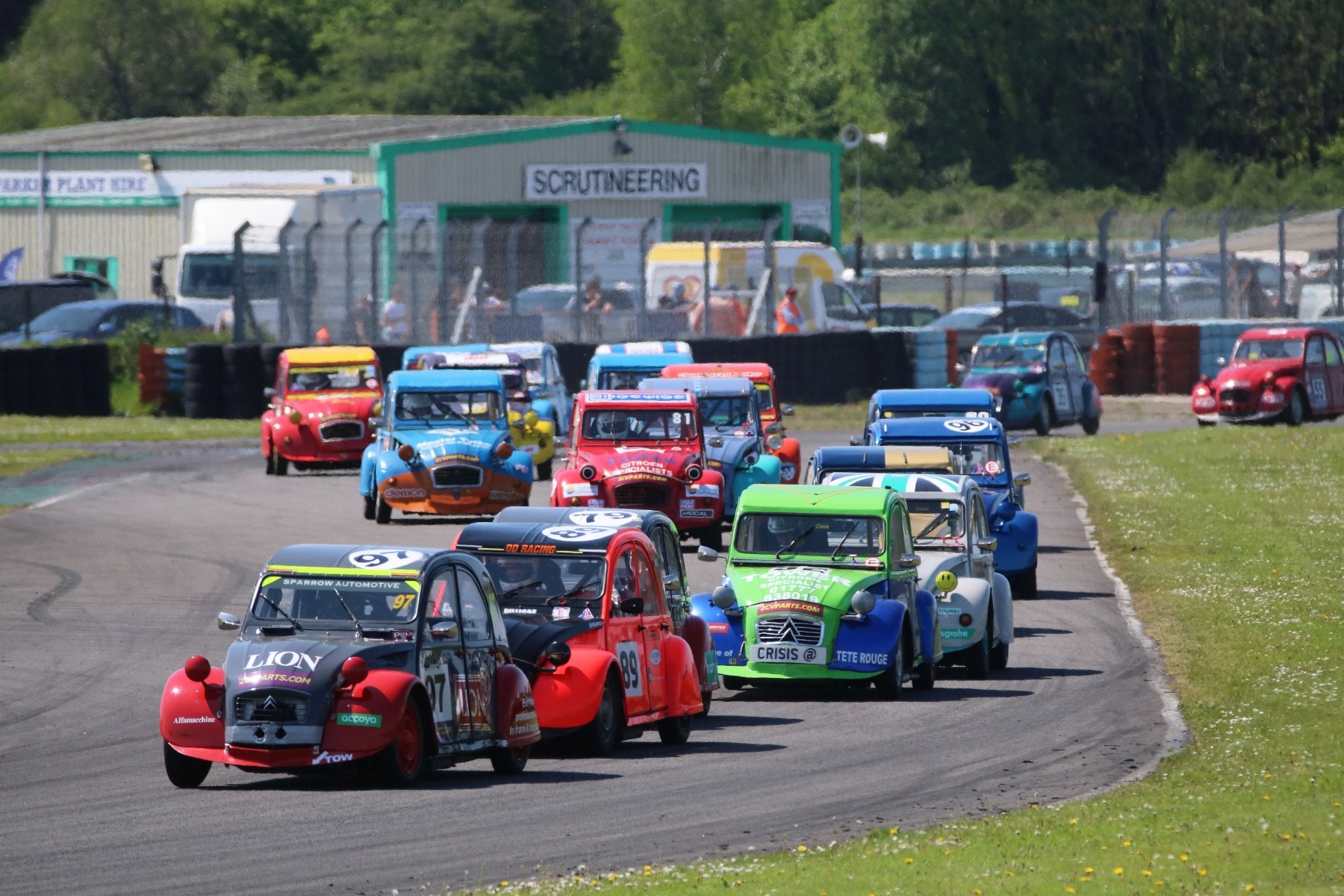 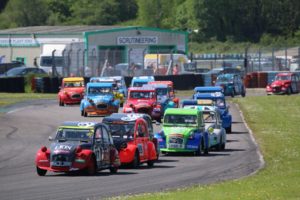 O’Keeffe was on pole for race one, but the start didn’t go according to plan. “I didn’t even see the lights never mind them going out, then they all went so I got going,” he admitted.

His delay had caused problems for Adnitt too, “I nailed the start when David didn’t move, changed into second gear too hard and pushed the linkage down into neutral,” he explained after pulling off exiting Spitfires.

The top five continued to reshuffle but still; managed to make a break from Riman at the head of the chasing group. 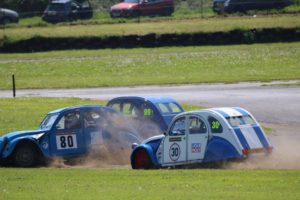 Crispin had taken charge, but on lap three O’Keeffe ousted Davies from second and was soon looking for the lead.

O’Keeffe’s challenge paid off a lap later when he led into Hatchetts, but having gone into the Hairpin fourth, Sparrow emerged in second, from Crispin, Roads and Davies.

The lead battle had also allowed Riman and Ainslie Bousfield to close in too, but it remained far from settled at the front.

Although O’Keeffe had the upperhand he couldn’t make a telling break, and had Sparrow and Roads duelling for second, after Crispin and Davies lost a little ground after contact.

When Roads was in second the pressure on the lead was clear for all to see, whereas Sparrow was trying to help defend any challenge on his usual team mates.

Behind them Riman was solo in sixth, having shaken off Bousfield, but Mick Storey had taken Yates for eighth and had Sandro Proietti soon following. 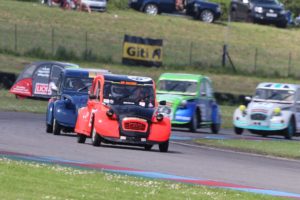 Having already lost Adnitt and Steve Walford from the race, Davies followed after nine laps, vacating fourth place. “I knew it was going to be a bit of a mad race and when I was following Nick Crispin I misjudged the distance and hit him, then broke the fan later and had to pull off,” Davies explained.

Davies’ retirement moved Crispin back to fourth, from Riman and Bousfield, but the battle at the front was still as intense as ever, but now down to four cars.

Into Hatchetts for the 11th time both Sparrow and Roads scythed ahead of O’Keeffe, but he was back into second at the crossing, with Crispin ready to challenge again.

It could easily have been any one from the top four right to the flag, with barely inches to spare. But O’Keeffe held on to take victory by 0.219 secs from Sparrow, and Crispin equally close in third.

“I lost a bit and was then able to catch them again and I had been on the grass twice,” Crispin admitted.

“Only 10hrs sleep in the last week to get the car ready was well worth it, really enjoyed the close racing in a car that’s not as quick as my usual one.” Sparrow replied. 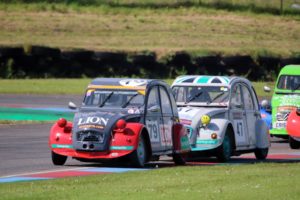 “It was a bit of a fight, but Pete was pushing me along to keep me at the front,” O’Keeffe added.

Roads finally finished fourth after losing his podium quest in the last couple of laps, “a good race with lots of changes, but no sympathy given. I didn’t get to lead though and was a little low on fuel at the end,” he said.

Riman and Bousfield completed the top six, “I had a fairly  good start and was with Chris Yates. Then the original  break fragmented but I managed to hold onto Martin for a while,” Bousfield explained.

Both Proietti and Storey were late retirements, Proietti with a blown engine and Storey after a brief excursion, which promoted Yates back to seventh.

“I had a battle with Ainslie and Sandro, it was tight but I couldn’t stick with it,” Yates added.

Only 0.187 secs split Andrew Bull and Simon Turner for eighth, while an unusually off pace Matthew Hollis rounded off the top 10. 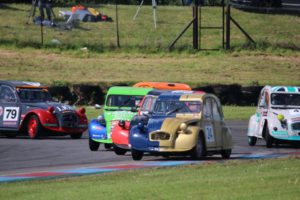 With only 0.328 secs covering the top five on the grid for the second race, Adnitt headed Chris Hall, O’Keeffe, Crispin and Roads with  another close encounter expected.

As the lights went out Adnitt just held the lead into Hatchetts, from Crispin, O’Keeffe, Roads and Sparrow, before Crispin went ahead into the Senna Esses.

O’Keeffe completed the opening lap second, with Roads, Sparrow, Adnitt and Davies making a six-car break, until Sparrow pulled off in a cloud of smoke at Spitfires on lap two.

Behind the lead pack, Turner headed the pursuit, from Storey and Matthew Hollis, before Storey went by into Hatchetts on the next lap.

Back at the front it was still five cars battling it out, with O’Keefe back in front, from Crispin, Adnitt and Davies, with Roads having slipped to the rear of the group.

While Storey had gone clear in sixth Hollis and Turner were still duelling for seventh place, but had another huge pack closing in on them. 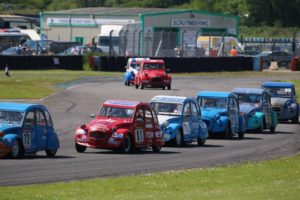 Storey had begun closing on the lead quintet, who continued to swap and change behind leader O’Keeffe. His lead increased slightly on lap seven when having lost out to Adnitt a lap earlier, Crispin was back to second but was all still far from settled again.

Into Hatchetts for the penultimate time Davies tried his luck down the inside and emerged second, before Adnitt tried the outside on the final lap, which didn’t work.

“I had another good start but knew the pack would hunt me down. I got passed David a couple of times again, but he had more pace,” said Crispin

“A pack of five, clean driving, I really enjoyed it,” Roads added,

The one-time seven car battle for seventh finally went to Andrew Bull by just 0.188 secs in hand over Julie Walford, with Turner and Yates completing the top 10, after Hollis dropped back.

Just missing out on the top 10 was Max Wyer, despite having made four places in one lap, only to drop back to 11th from where his move started.