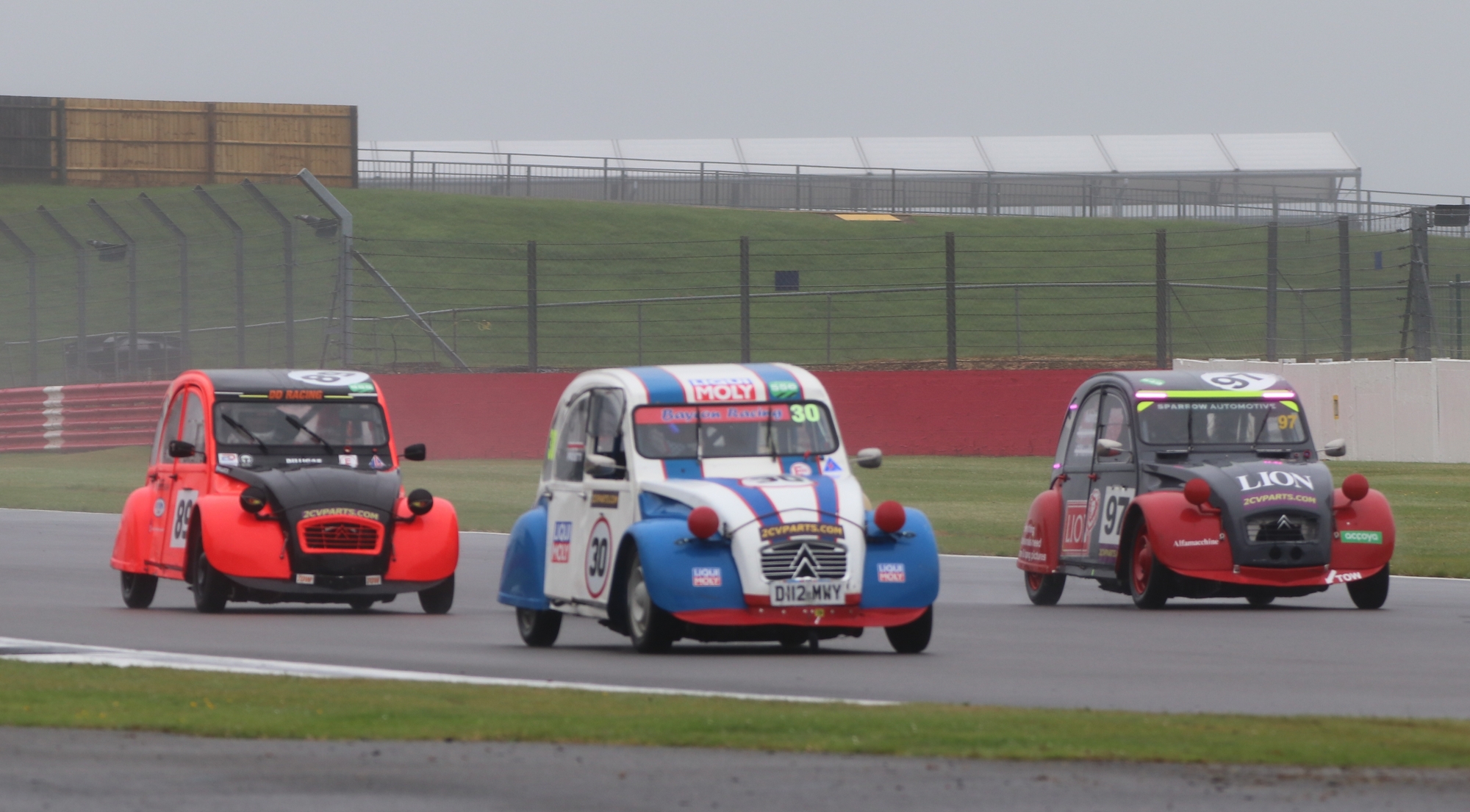 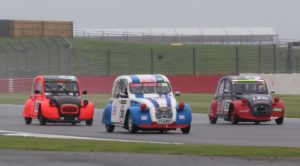 There was no shortage of action at a soggy Silverstone, where the 2CV Championship once again lined-up a 20+ car grid.

In the first race Luca Proietti led the initial charge down the Wellington Straight, heading Lien Davies, Nick Crispin and Gary Adnitt out of Brooklands.

Crispin was soon in front however and led a three-car break on lap two, from Proietti and Davies, with fourth placed Adnitt under pressure from Nick Roads.

Proietti tried to sling shot Crispin for the lead through Brooklands on lap four, just managing to retain second after using all of the run-off.

By half distance the top six had split into three duels, with Crispin v Proietti, Davies v Adnitt and Roads v David O’Keeffe, but it soon changed, when Proietti tried the wide line into Brooklands again and emerged with the lead, while Roads slipped behind O’Keeffe, as they both trailed Adnitt in a duel for fifth.

It was still line astern for the top three, but Crispin was back in from after eight laps and despite Proietti’s best efforts that’s how it stayed to the flag, with Crispin taking his first win of the season by just 0.159 secs, with Davies a close third.

“I had a good start and knew when I got away I had good grip and traction. I just had to work out where was too much and where was just enough, as Luca was just too hot in some places,” said Crispin.

“I lost the lead back to Nick at Maggotts, facing backwards when I locked up and spun, just left facing Nick and Lien,” Proietti explained.

“I was on Luca’s tail to push him back, but it was like a pram on goose fat, but happy to come in unscathed and see Nick win,” Davies added.

Although Adnitt held onto fourth, he took the flag with little to spare over O’Keeffe and Roads, who almost swapped through Woodcote as the flag came out.

“I got away with the leaders but then went offline as I made a run on Nick and got delayed. They got away and tried to hold my line from David and Nick Roads,” said Adnitt.

“Nick had a late charge at me, it was close but under control as much as it could be in the conditions,” O’Keeffe added.

“I had more grip than I expected and thought I had just nicked fifth from David. I could have had a go through Copse if Gary had been a bit quicker,” Roads explained.

Pete Sparrow was having a run in Andi Donaldson’s car and was in a solitary seventh for most of the race, while Andrew Bull came out on top of a big sort out for the rest of the 10, taking eighth from Mick Storey and Sebastian Jones-White. “I was eighth until I got a tap through the gravel at Luffield. The car was great though,” said Jones-White.

Martin Riman and Chris Yates ran in seventh and eighth in the early laps, but both missed out on the top 10, while Julie Walford just held off Simon Turner behind them. 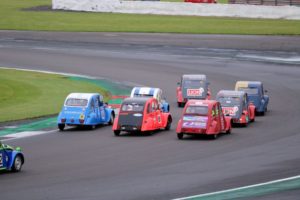 It was still damp for race two, which O’Keeffe led as far as Becketts before running wide and dropping to fourth.

Crispin had the lead, with Sandro Proietti taking Adnitt on the exit of Becketts, but by the end of the lap it was Proetti, from Adnitt, Crispin, O’Keeffe and Steve Walford.

Adnitt ousted Proietti for the lead on the second lap, but it was all change again a lap later, as O’Keeffe followed team mate Adnitt into second, with Davies and Walford close as Crispin and Proietti both lost ground.

But exiting Copse a lap later the top three were in the clear, as Davies led Adnitt and O’Keeffe.

Although Crispin was still fourth, he had a damaged front wing, “I went for the inside at Copse and I though I had room and that Steve was letting me through,” said Crispin. However Walford turned in and they collided, sending Walford into a spin when he had further contact with Sandro Proetti and was then hit by Oscar Proietti.

“After Nick had tapped Steve he came back across the track. I thought I had missed him, but he caught by rear wing,” said Sandro. “He was rolling back when I hit him hard,” Oscar replied after retiring from eighth.

Davies was able to extend his lead, with O’Keeffe taking up the chase after passing Adnitt on lap eight. “The car ran well, I had good grip and managed drive passed Gary on the straight. “I could see them both behind me and wondered why they weren’t coming for,” said Davies after taking his win by over four seconds. 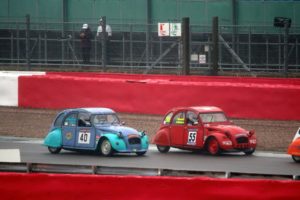 It was Adnitt in second though after O’Keeffe went off exiting Brooklands on the last lap. “I was just too quick going in and didn’t come out. I found the slippery bit and was in the gravel, after my mistake was trying to fight it,” O’Keeffe admitted.

“I had let David by as I thought he had the better chance of catching Lien, as I couldn’t keep up. But when I saw David spin off, I just laughed my socks off,” Adnitt replied.

Roads therefore completed the podium, fractionally ahead of Crispin and Bull, who swapped on the last lap.

“I had the handbrake partially on at the start, then released it and felt the benefit,” Roads admitted.

Owen completed the top six from Yates, with Turner, Proietti and Donaldson rounding off the top 10, after Proietti pitted to have his rear wing pulled off.

Glenn Oswin was 11th, from Nigel and Matthew Hollis, while behind them Lauren Storey survived two large drifts at Becketts and Brooklands to come home 14th. “I just couldn’t dive the car,” Lauren admitted. 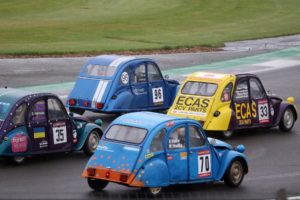 Riman and Wyer had been early retirements but none as early as Ainslie Bousfield. “It wouldn’t start on the grid, so I changed some fuses but one blew again. I was pushed off the grid and they tried to start it, but it refused,” he explained after failing to start the race.