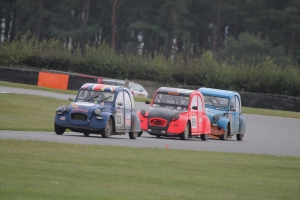 The numbers may have been down on last year, with the European visitors unable to make the trip, but the atmosphere and competitiveness were as strong as ever, despite the weather.

Wingrove/MWR’s Euro Hybrid with Peter Dalkin at the wheel was straight into an early duel with Alex Osborne’s AP Motorsport Mini, but it was Osborne that had a 6.661secs after the opening hour, a lead halved by the appearance of the safety car, when Chris Yates went straight on at Riches in the Blueberry Muffins car.

After Osborne had taken charge, Dalkin was straight into a second duel with Team Toyshed’s Chris Slade.

The rest of the top six was made up of Mini’s too, with Slarky Malarky’s Neil Slark, Team Mini-Uns Ashley Shelswell and Lyford Racing, before Pete Sparow led the Classic 2CV class for Team 2CV Lion, well up on Brian Heerey’s Crisis at Tete Rouge car.

The rain was getting heavier but from the green flag Dalkin was back ahead again into Riches, as Slade closed on Osborne for second. 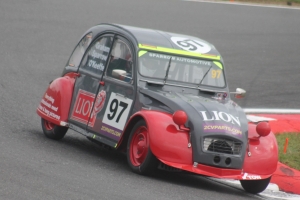 But after the second hour Dalkin was a lap clear of Osborne, despite having a spin at Coram as Slark and Slade continued to duel for third, with Team Mini-Uns closing too.

Team 2CV Lion had climbed to sixth overall, but there were three more Mini’s on the leaderboard before Heerey’s 2CV in second place.

Davies had broken away for ECAS in for third in class too, with James Northfield’s Twin Snails completing the class top four.

Most of the first planned stops came in the third hour, but the MWR Wingrove car was still a lap clear, as the APO, Slarky Malarky and Team Toyshed Mini’s battled for the overall podium.

“It was very slippery, I kept going around the outside of the Hybrid but he powered back ahead on the straights, then the safety car kept closing us up too,” said second placed Osborne.

But some had problems already, “we had to make an early stop when a wheel bearing broke,” said Rosie Racing’s Julie Walford.

“I did three 3hrs and 20mins, had two spins and an excursion, but waited for the safety car before pitting and it didn’t appear,” Davies explained.

Both Blueberry cars had problems too, “at the first corner the car in front braked hard I lifted and spun,” said the Tarts Jessica Owen. 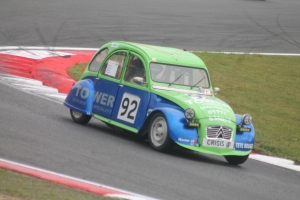 “My first stop was at the yellow flag when the Tarts spun, then a penalty for overtaking when I was just regaining the place taken off me,” added Muffins Chris Yates.

Crisis @ Tete Rouge were still in second, from ECAS and Twin Snails, but with the rain continuing to fall darkness came early.

Into the night Matthew Cobb put together a string of sub 2 minute laps to build the MW /Wingrove lead. With Mark Waghorn and David O’Keefe sharing to, they were seven laps ahead into Sunday morning.

The Mini duel for second had continued but it was Slarky Malarky now ahead of APO, after Lee Poolman encountered a misfire, with Mini-Uns next up and the 2CV Lion squad fifth overall, from Crisis @Tete Rouge and Twin Snails now third in class after a charge from Paul Rowland. “I am bloody good I am, and Alec got a great slide on trying to pass me on the inside at Coram,” said Rowland.

Toyshed had dropped well down though after a problem. “A bolt came out of the bracket for the clutch and it flexed rather than change gear,” Michael Dryden explained. 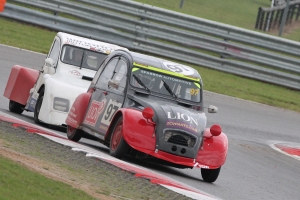 But as dawn approached Slarky Malarky had a two lap lead with MW Wingrove six laps off second placed APO after a number of overnight problems. “The crank sensor, the throttle cable and lots of other bits,” they explained.

Just before 7am there were more dramas, as MWR/Wingrove slowed again and headed for the pits and APO were in with a snapped fan belt.

Slarky Malarky’s quartet of Neil and Ian Slark with Ben Butler and Steve Miles continued to lead the way, but despite their problems MWR/Wingrove were back in charge into the 20th hour.

They had another throttle cable breakage and had to be towed in. So Waghorn replaced Dalkin for a short stint before Cobb brought it to the flag and sealed victory.

Ian Slark handed to Neil for the final Slarky Malarky stint. “This was when we start hearing things,” Ian admitted.

Team Mini-Uns were third after APO had a two lap tow back penalty after running out of fuel, “Ade Tuckley did two night stints, but we weren’t brave enough in the dark,” Mini-Uns Shelswell admitted.

The Lyford quartet of James and Nick with Alan Evans and Tim Harber were fifth, but there was a dramatic finale to the 2CV class and sixth overall.

Sparrow had taken over from O’Keefe at about 7.15am, but just before 10am he pitted with concern over a front wheel. He rejoined but was soon back in changing the front hub assembly. “I still heard a noise maybe a rear bearing, then it went away and I just got on with it. I decided to stop worrying unless a wheel fell off,” he reckoned. 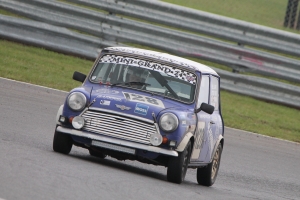 Their problem gave Crisis @Tete Rouge the class lead, with Twin Snails second, but with Heerey at the wheel, they had a late crisis with two hours left, when a front steering arm broke at Coram.

So Sparrow/Graham/O’Keeffe were back in front and claimed another win, but Crisis @Tete Rouge’s Heerey/Nick Roads/Sandro Proietti and Ian Gibbon were still a clear second, with Martin Riman, Aubrey Brocklebank, Northfield and Rowland completing the class podium for Twin Snails.

Rally racers had been up to second in class after some sterling work from Freddie Martin-Dye and Dan Willan. “It was going great until it broke, I think I passed every car twice,” said Martin-Dye.

All 21 cars that started took the flag in some form, some as they had started and some rather modified. 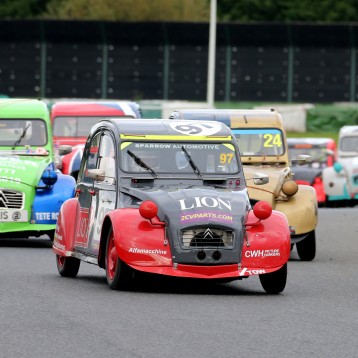 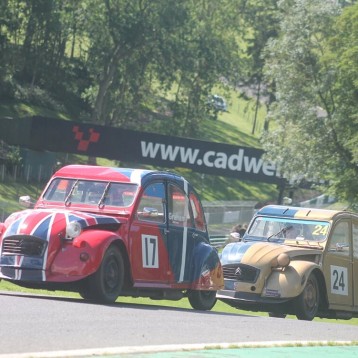