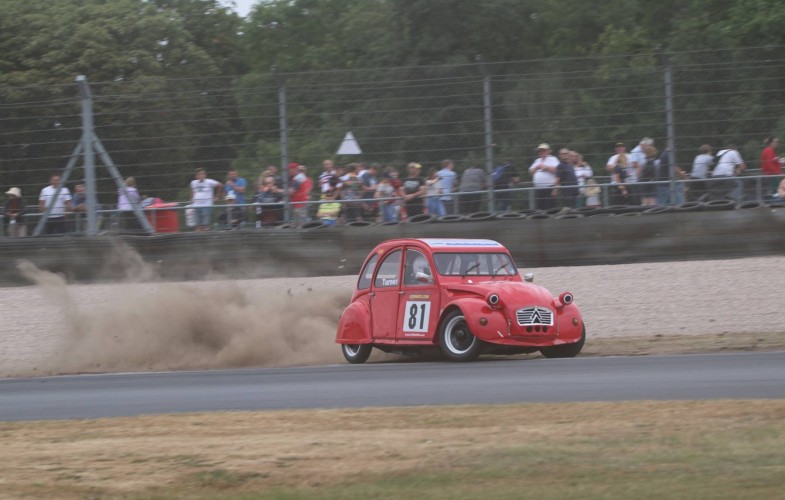 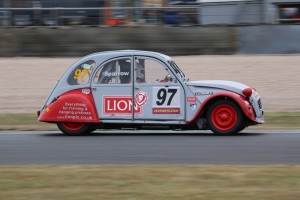 In true 2CV style it was action all the way in both races at Donington Park last weekend.

Pete Sparrow led into Redgate in the first race, from title rivals Matthew Hollis, with Nick Crispin third at the OId Hairpin. Steve Walford was in fourth until he took to the grass at the Old Hairpin, but came back into huge scramble for the chicane.

Mick Storey, Crispin, Ainslie Bousfield and Lien Davies went in four abreast, but somehow Walford passed them all to exit in third. “It was just opportunist as a gap opened on the inside,” said Walford.

Such was the battle for third, it enabled Sparrow and Hollis to escape at the front. Walford however was leading a seven car train on lap two, before Bousfield got by at McLeans, while Nick Roads then lost out with a grassy excursion.

Davies completed the lap heading the now six car line, but both Bousfield and Walford took him back a lap later into the chicane. “My car was a bit oversteery, erratically so, but the brakes were great,” said Walford. 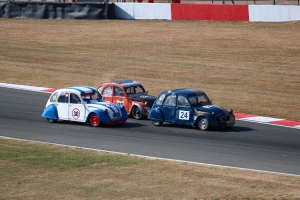 It was constantly changing, but Sandro Proietti was the next to lose ground, falling to the back of the chasing group. Davies and Walford had contact at the chicane however and as they arrived at Redgate for the fifth time, Crispin was with Walford, who then went wide again at the Old Hairpin, before Crispin finally snatched the place at the chicane, with Bousfield following.

Hollis had continued to shadow Sparrow for the lead and it was only through lappery in the second half that the tow was finally broken. “I was quicker into Coppice than Pete and had the pace on the straight. I thought about having a go at the chicane a few times, but decided to wait until the last lap and launch it. I didn’t get the chance though as I was held up and could see Nick closing too,” said Hollis.

“Matt drove really well and I couldn’t have gone any faster. I just had the edge on straightline speed I think, but he was able to draft and stay with me. I kept expecting him to have a go, but then he got blocked,” Sparrow added. 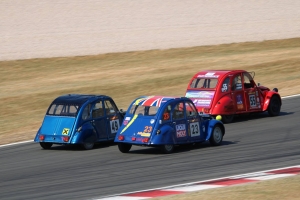 Crispin and Bousfield also made a slight break after seven laps, which left Storey, Walford, Proietti and Davies fighting for fifth.
Storey then started to close on the third placed duel, but Davies hadn’t given up either, despite a few off road excursions.

But into McLeans on the penultimate lap, Bousfield ran wide and Davies was through. It was enough for Crispin to seal third, while Bousfield fought back to recover fourth from team mate Davies on the last lap.

Storey completed the top six, with Walford seventh and Roads eighth, after he took Proietti on the last lap. “I had damaged the fan early on and had oil leaking onto the brakes, so was happy sitting at the back of the train,” said Proietti.

Chris Yates completed the top 10, after a hard fought battle with Marc Grasby and Brent Savage over the closing laps. 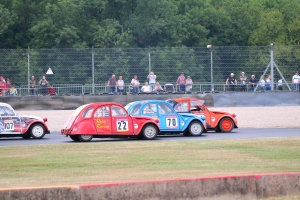 It was Sparrow to the fore again in race two, but not for long. Crispin was second into the Old Hairpin and had the lead at McLeans. Into Coppice however Sparrow and Luca Proietti went by, leaving the erstwhile leader holding off Tom Perry, Brian Heerey and Simon Clarke for third.

Proietti was inches behind Sparrow for most of lap two, as both went clear as third became another six car battle, with Perry and Clarke both demoting Crispin.

Perry managed to leapfrog both of the lead pair on lap three, making his break with Proietti, while Sparrow tried to fend off Clarke for third.
Sparrow appeared to be struggling for grip, but at the front Clarke had managed to open a gap on team mate Perry, as seven cars shared the chasing group.

Proietti’s hold on third came under threat from Heerey, after he started to drop back from the duelling Gadget pair briefly. 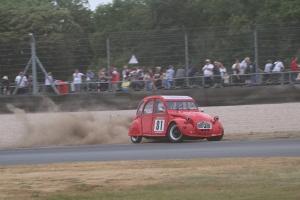 Perry took a brief look at his rival into the chicane on the last lap, but they held station with Clarke taking the win.

With a lap to go Heerey ousted Proietti at Redgate to secure third, but Luca retained fourth, clear of Sparrow and Crispin as they rounded off the top six. Fifth however was enough for Sparrow to become champion again. “The car was Ok for about five laps, then really wayward and sideways. So I had to back off a bit as I didn’t want to crash,” said the Champion.

Matthew Hollis was a fairly solitary seventh at the end, with Kristian Tovey eighth, after he finally overcame Julie Walford, and Martin Riman was tenth. “I needed to beat Pete Sparrow to keep the championship alive, but lost out at the chicane on the opening lap. I had oil leaking onto my brakes and was locking up at every corner, but got him and Nick Crispin for one lap, but they took me back at the Old Hairpin,” said Hollis. 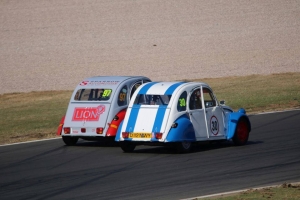 This year’s championship has been more open than in recent years, a point Champion Pete Sparrow was quick to illustrate, “I have not won with out and out speed this year, there has been some serious competition , with Matthew, Luca, the Gadget boys, Nick and Brian Heerey now too. I had to work hard for it and glad it’s settled before the 24hr race.”

The 24hr race is at Snetterton on August 17th-19th weekend and will conclude this year’s 2CV Racing season in the UK. 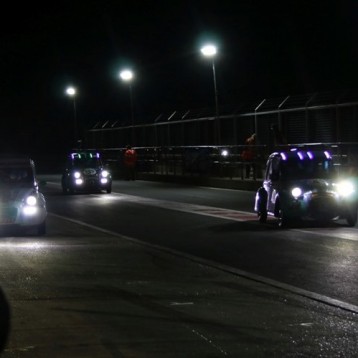 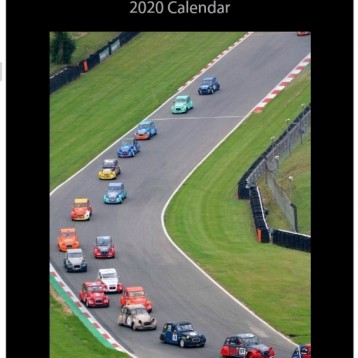 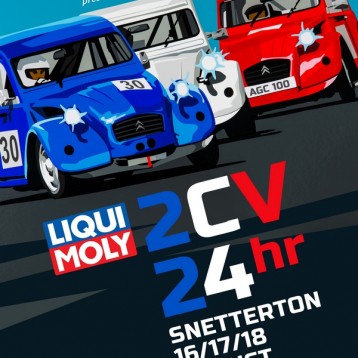