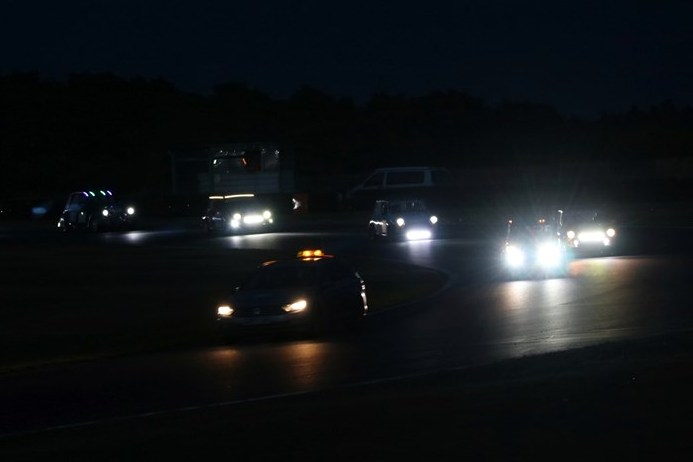 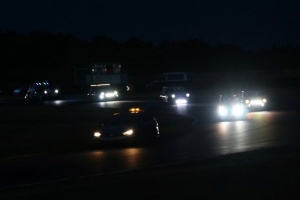 TEAM GADGET TRIO TAKE THE WIN, BUT IT’S ANOTHER TITLE FOR SPARROW.

But Sparrow had problems and lost his advantage, finishing the opening hour in third, behind Tete Rouge Crisis and Beacon Downe.

The Tete Rouge quartet of Heerey, Nick Roads, Ian Gibbon and Sandro Proietti and held sway until the fifth hour, when having shared the car with Sparrow, David O’Keeffe and Alec Graham were back into the lead, from Team Gadget, with Tete Rouge down to third.

All three stayed in the podium places for the next four hours, but reaching midnight it was Tete Rouge on top by 0.259 secs over from Team Gadget, with Team Lion 1 down in third.

Although Rosie racing were next they were four laps adrift, while Team Twin Snails and GS Racing completed the top six. 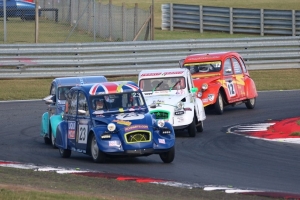 From 2am though Tom Perry, Simon Clarke and Lien Davies took charge and started to consolidate their advantage. “We had lost time though with blocked jets though when I was leading and lost out again for a while,” said Perry.

But what of Team Lion 1 woes, after setting the early pace? “I led again but had a problem with points. It upset the timing and we had to change the engine,” said Graham.

“I was on the lead lap in third too and wanted to work with our second car. But they pitted almost out of fuel,” O’Keeffe added.

At half distance though Team Gadget had a lap in hand over Tete Rouge, but it was GS Racing into third, with Nick Crispin, Marc Nordon and Hames Dartiailh a further eight laps down. “I had started the race for the first time, but crashed into Glen Oswin when I ran out of brakes at the Hairpin, then had to adjust the carburettor after four laps,” said GS lead driver Crispin.

Rosie Racing had moved up to fourth, but were now 10 laps off the class lead. “I had started but had to pit when I couldn’t get second gear, then it just got worse and we had to stop for Steve to welded it,” Julie Walford explained,

In fifth Twin Snails had problems too, “James Northfield had started for us, but we had a throttle spring break during the night, but doing Ok,” said Martin Riman. 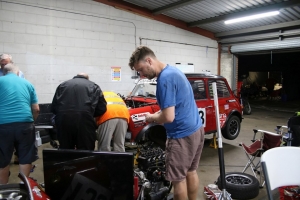 Last year’s winners Beacon Downe had been had started well but problems soon arrived for them too, Richard Gardner had to pit with overheating brakes and Louis Tyson had a gear linkage break during one of his stints, along with other less major problems.

Over the next three hours Team Gadget extended their advantage over Tete Rouge to three laps. “Simon always starts for us, its tradition. Fuelling was horrendous though and went badly through the night, we changed the jets but our afr wasn’t working so we had to check the plugs,” Davies explained.

“It had been going Ok I got the lead for us, handed it over and got it back within laps, but we can’t stay there,” Heerey replied.

With numerous engine changes and a variety of other problems, the order was still far from settled when dawn broke.

The gap between the leaders had been reduced to two laps, by 8am, with GS still a clear third over, Twin Snails, Rosie and Beacon Downe, but Team Lion 1 were closing. 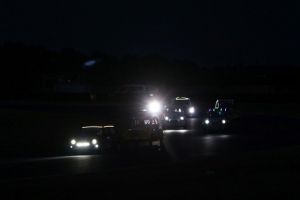 Two hours later Tete Rouge had taken back one lap and despite Davies bringing the lead car in with a puncture in the 20th hour, the lead was still a lap.

But Sparrow and Graham were flying for Team Lion 1. Rosie Racing had lost out to Beacon Downe, Twin Snails and Team Lion, leaving the latter looking for a podium still at least.

Sparrow took the Twin Snails car for fifth around Coram, before Beacon Downe’s looked turned again when Gardner pitted with a broken engine mount and a bladeless fan, handing to Peter Rundle while it was repaired.

The 21st hour brought up lap 600 and Tete Rouge managed to lead again, but only for one lap.

Clarke had been out for Team Gadget and made his final stop with 1 ¾ hrs on the clock, handing to Perry to bring the car home. “We have put our lightweight driver in and it’s now his to lose,” said Clarke.

It was a clear run to the flag for the Gadget trio, a repeat of the team’s last win in the 24hrs 11 years ago. “There wasn’t that much between me and Brian, but cannot thank Wayne and the other boys enough for this win, fantastic,” said Perry after taking the flag one lap clear.

“I tried as hard as I could, but couldn’t close that gap and hit the Beacon Downe car too, so had to pit again for the wing to be pulled out,” said second placed Tete Rouge Crisis’ Heerey.

O’Keeffe managed to get Team Lion 1 back on the podium in the penultimate hour at Crispin’s expense. “I was sniffing exhaust fumes for the last two hours though,” Crispin explained after brining GS Racing home fourth. 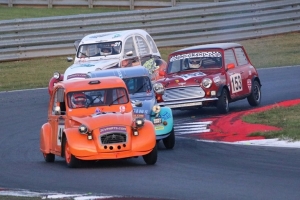 Beacon Downe still made it home fifth, aided by a late problem for Twin Snails. Riman came in for the last stop and needed an engine change before Northfield tookover, but he still held onto a well-deserved sixth.

Last minute Racing were one of the first to have problems, “Jim McDougall started and we knew we were in trouble when we had to change the engine after one lap, “said Mike Marais after many more changes throughout the 24hrs.

Iceni and 2CV Vision with SSR both completed more engine changes than your local garage in a month too, while the Hollis family managed an air filter fire and father Nigel tipping over in a cabbage field.

Just to finish things off Blueberry Tarts Shirley Hennessy lost a wheel in the closing laps and GR Racing’s Simon Glenn was stuck in gear at Murrays and had to get out and had to be pushed across the finish line. 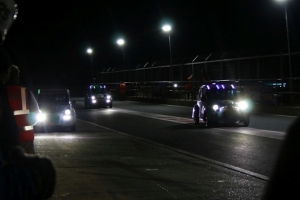 Four Euro cars made it to Snetterton to race in the Euro Class for 24hrs, but after only a few laps their numbers were reduced when the open topped Burton was out after 14 laps with an engine failure.

The BNLL car of Michel Crespin, Mehdi-Rik Boucherau, Philippa Denis and Claude Crespin led from the second hour, after the second team car had led initially, but finished four laps down after a crash at Riches, cost them a three laps tow back penalty.

CGS Racing Team were still classified third, despite not running at the finish.

In the Mini’s it was a win for Slarky Malarky’s Neil and Ian Slark with Ben Butler and Steve Miles.

Having finished the first hour in fourth, they led from the fourth hour and took the win and third overall by nine laps from Team Toyshed, with No Sleep til Sunday retaining third, despite a roll.