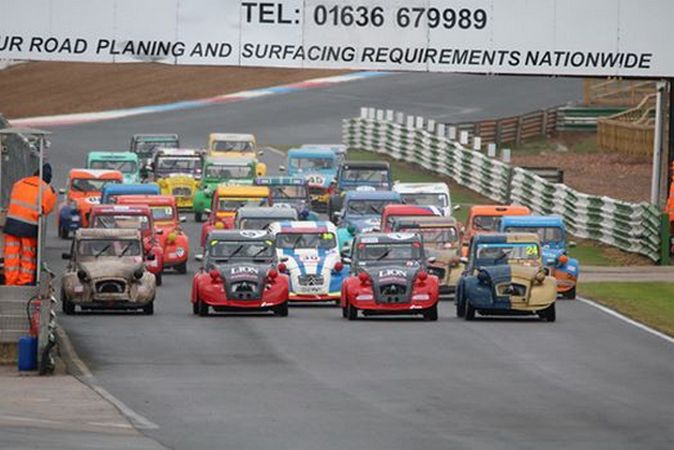 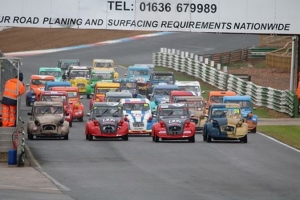 29 cars made it to Mallory Park for the 30th Anniversary of 2CV Racing.

It was wet for the start of race one and there were dramas from the opening lap. Simon Clarke was first into the Esses, “I was fighting it but there was just no grip at all,” he said after spinning wildly into the escape road. Pete Sparrow was caught up in it too, “I didn’t want to be first into the Esses and you see why. But I was going wider and wider to avoid Simon and ended up in the pitlane,” he added.

With Luca Proietti on the grass to the left, it was Martin Riman that led into the Hairpin, but he went straight on! “I did lead for a few yards though,” he confirmed.

David O’Keeffe emerged as the leader at the end of the lap, with Alec Graham and Matthew Hollis battling for second, followed by Nick Crispin, Steve Walford and Tom Perry.

O’Keeffe started to make a break as Hollis slipped into second, which left Graham under attack from Crispin for third, and Walford duelling with Perry for fifth.

Crispin and Graham shared a couple of exchanges, before Perry grabbed fifth at the Hairpin and as the top four got away again, Crispin started to lose touch.

Back at the front Hollis was on the attack and led into Gerards on lap seven, with Perry following. A lap later it was Perry to the fore, as Hollis and Graham duelled and O’Keeffe looked on. 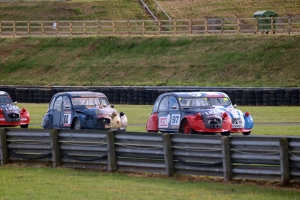 All the action allowed the recovering Sparrow to close in and when Graham and Hollis both went straight on at Gerards on lap 13, he was into second behind O’Keeffe, with Perry down to third. “Apart from the grassy moment, it was a good tight race, but I could hardly see in the spray, and Gerards arrived a bit earlier than I expected,” said Graham. “I couldn’t see either, but braked in the same place and followed Alec off,” Hollis added.

It came down to three for the lead but O’Keeffe just held on to head Sparrow to the flag. “A very difficult wet race, but up front we at least had some visibility and just looked for the grip,” he explained.

Perry retained third, with Walford claiming a late fourth from Proietti, after both had demoted Crispin. “A few fell over and helped me get up the order and there was a little tangle with Luca as we could hardly see,” said Walford. “My hardest drive ever,” Proietti added.

It was drizzling again for the second race but Sparrow held the lead from pole into Gerards, from O’Keeffe and Brian Heerey, with Mick Storey taking Crispin for fourth into the Esses.

Heerey was ahead by the end of the opening lap, before O’Keeffe led down the Stebbe Straight, with Sparrow slipping to fifth as the rain started to fall again and it was all change. 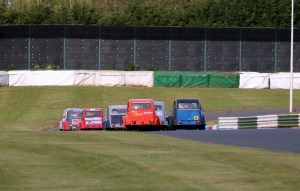 O’Keeffe, Heerey and Julie Walford had got away, after Lien Davies pulled off with lost drive. For fourth however it was any one from Crispin, Storey, Richard Hollis and Kris Tovey.

Heerey had the lead but couldn’t break the tow. They shared a couple of exchanges before O’Keeffe made it stick over the closing laps, only to be penalised for a jump start, handing the win to Heerey. “A good race, very slippery though,” said Heerey.

Crispin and Walford enjoyed a great duel for third early on, which stayed in Crispin’s favour from the Hairpin on lap eight. “I had the misfire back again. When it was going it was great though,” said Crispin.
Walford then had a three way fight with Storey and Hollis. Storey had got away but then messed up with a lap to go. “Someone shortened the circuit and I went straight on at the Hairpin.

Hollis and Walford then had exchanges, with Walford ahead at the Esses on the last lap, she tried into challenge Storey too at the Hairpin, but went straight on and handed fifth back to Hollis. “It was whoever had the best corner exit and I struggled to get around the Hairpin,” Walford added.

Sparrow had recovered from a couple of incidents to take fifth on the road, but a jump start penalty dropped him to 10th behind Tovey, Neil Savage and Louis Tyson.

“There was a lot of petrol down so I ran wide at Gerards and then had a spin exiting the Esses too,” Sparrow explained. 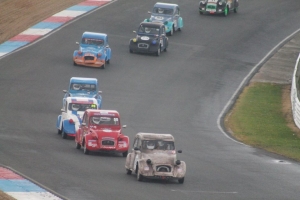 It was finally dry for the start of the third and final race. Sparrow led Proietti from the start. Perry was second as they exited Gerards for the second time, but the safety car was out and soon followed by red flags.

Chris Yates had spun and been hit by Nigel Hollis into Gerards and Sohrab Padidar-Nazar had gone heavily into the tyre wall.

The restart was over six laps with Sparrow and Proietti wheel to wheel at the start. But as the filed into the Esses for the second time it was six cars as one, as Crispin nosed ahead from Sparrow, Proietti, O’Keeffe, Perry and Julie Walford.

Sparrow was back in front at the Hairpin a lap later, with Proietti still hanging on to him, before the defending champion pulled off at Gerards with a blown engine.

Proietti had the lead but Perry was into second and still under attack from Crispin, O’Keeffe and Walford.

But into the Esses for what became the last lap, Proietti bounced over the grass and dropped to fifth, leaving Perry to claim the win, from O’Keeffe, Walford and Crispin. 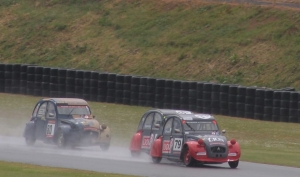 Savage had closed too in sixth, while Roads, Graham, Storey and Tovey rounded off the top 10.
“Luca was very fair and gave me just enough room. I managed to look at my watch and saw it was six o’clock, so knew it would be the last lap,” said Perry.

“That was my race for the taking, except for the last lap and they stopped it early,” Proietti replied.