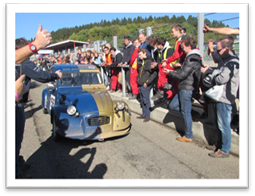 Nick Roads and Caryl Wills discussed over the winter of 2014 if they could create a new 2CV racing class to allow them to race at Spa and in Europe with a faster 2CV than UK Club Class.
They consulted within the Crisis Racing team and with Pete Sparrow, Peter Dalkin and Paul Robertson whom had raced with and built Belgian hybrid 2CV’s. An outline plan was agreed and then agreed with Classic 2CV Racing Club “C2CVRC” and “2CVRT” (2CV racing organisers in Belgium whose fastest class are known as 2CV hybrids) as to how regulations could work.

The design parameters were:

The regulations were to only apply in Europe and thus protect the UK Club class.

Crisis Too Car # 36 was readied for its first race as a UK hybrid at Zandvort in June 2015 being a 6 hour race with 2CVRT. With only 1 test day it arrived at the track, qualified and started well with its race finishing after an oil pipe failure 4 hours into the race causing a spin and some damage 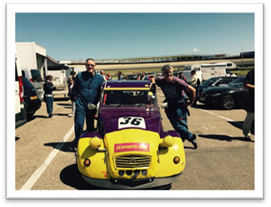 click the
link/ picture
to the left to
see video

It was then converted back to the UK club class and raced at the UK 24 Hour in August 2015. The concept worked.

Both Crisis cars arrived at Spa in October 2015 after top 10 finishes in the UK 24 Hour race as UK Club class as UK Hybrids. Car #36 completed the whole race without major incident and was 16th of 60 cars, 21 laps ahead of the first UK Club class car. Car #52 had a gearbox failure but also completed the race after repair.

In 2016 Tete Rouge and Gadget Racing joined with 2 more UK Hybrids. Different brake dics were used from 2015 and some other small changes. All 4 of the UK hybrids finished in the top 30 with Gadget Car#156 9th overall. Tete Rouge converted their UK club class car for less than £ 2000 to UK hybrid specification.

In 2017 March Hare Racing converted their club class car #81 to make a 5th UK Hybrid, Caryl had moved on to set up the C1 Racing club so his car was parked up and has not raced since 2016. Test days and racing at Croix had shown that the 2CV gearbox was struggling with the BMW power but for Spa the format had worked well. Crisis # 52 had a mostly incident free race and was 12th of all the 2CV classes, the other 3 UK hybrids had a lot of issues mostly around gearbox and braking. The C1’s joined the 24 hour at Spa in numbers in 2017 and the grid was around 100 cars. 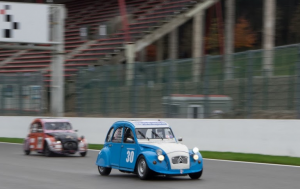 In 2018 it was agreed to change some of the UK hybrid regulations to try and improve reliability. Gearboxes became free as did outboard brakes at the front. Car #81 raced at Magny Cours with a 2CV gearbox and then moved to try an Audi A4 gearbox while Crisis #52 went for a Sadev gearbox used by the 2CVRT Hybrids.

Spa saw 122 cars on the grid. No UK club class entered and all 3 of the UK hybrids had reliability issues during the race, Tete Rouge #30 taking the top step in the class.

For Spa the UK Hybrids agree to run ‘free’ as to air restrictors which would further improve their
performance. There was a large grid of 148 cars, the 3 UK hybrids qualifying within the top 25 places overall. 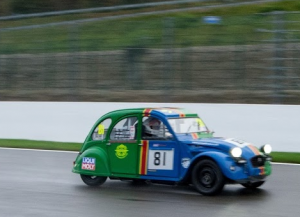 Car# 81 now as Pork Pie Racing, had gone back to a 2CV gearbox but with outboard brakes, was particularly quick and with a great start was running in 2nd place overall for laps 10 to 17 of the race. Clutch and gearbox issues along with a crash dropped them down while Crisis #52 had a major crash after 3 hours. Tete Rouge #30 once again took the top step and completed its 4th 24 Hour race. It had added outboard brakes since 2016 but Paul Robertson estimates that the conversion costs were less than £ 4000 over all of the 4 years.

2020
The UK hybrids have proved that they are exciting racing cars and a considerable step up in performance
from UK Club class while remaining close to a standard 2CV in appearance, at least externally!

The ambition is to continue to allow cars and teams to develop their cars with more variety and options than for standard UK Club class. The focus on European racing with 2CVRT provides plenty of endurance racing opportunities and with the popularity of the C1 class high grids and cars that are similar in performance ensures exciting racing. There are opportunities to race the cars in other series and formats than with C2CVRC in the UK, BARC Saloons and CSCC classes for example. 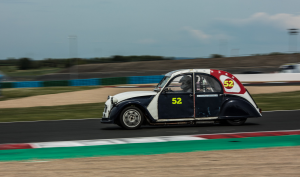 2CV UK Hybrids are more expensive than C2CVRC 2CV Club Class racing but as Tete Rouge shown can also be much lower cost than C1 racing.

For anyone interested in conversions then contact any or all of Paul Robertson, Colin Willson, Pete Sparrow, Nick Roads or Wayne Cowling.